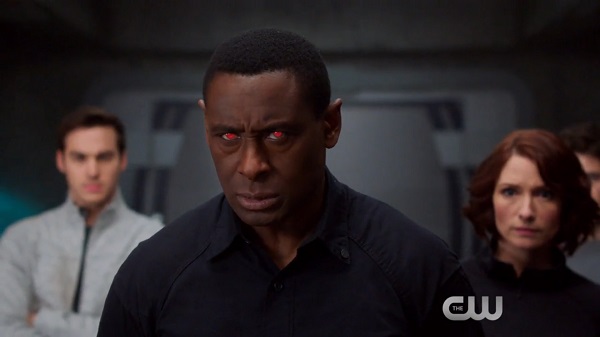 We’re getting close to the end of the season and it looks like Supergirl is in the thick of it. In the trailer for “Distant Sun,” directed by Kevin Smith, Supergirl must fight off a host of alien assassins who have come to Earth to collect a bounty that has been placed on her head.

Related: Check out our recap of the latest Supergirl episode “Star-Crossed”

Mon-El’s parents, Queen Rhea (Teri Hatcher) and King Lar Gand (Kevin Sorbo), haven’t returned to Daxam yet and we see the former Prince of Daxam-turned-Mixologist explain his day job to his parents.

“I’m the Girl of Steel. I don’t bend, I don’t break, I don’t stand down for anyone,” Kara says in voice over as we see her and Mon-El fight each other in a parking lot. And did Mon-El grab her and go through apartment window? And is that his hand angrily curling into a fist? I wonder if the fight in the parking lot is the result of whatever happened in her apartment.

Plus, J’onn shows his angry eye, Mon-El gets slapped by his mother and punched in the face by Kara, #Karamel has a moment, and Alien assassins are everywhere.

The real question is: who would put a bounty on Supergirl’s head? Was it Mon-El’s parents? Or maybe Lena Luthor? We haven’t seen her in a while and we know that she’s pretending to be something she’s not.

Watch the trailer below and we’ll see you on Monday.