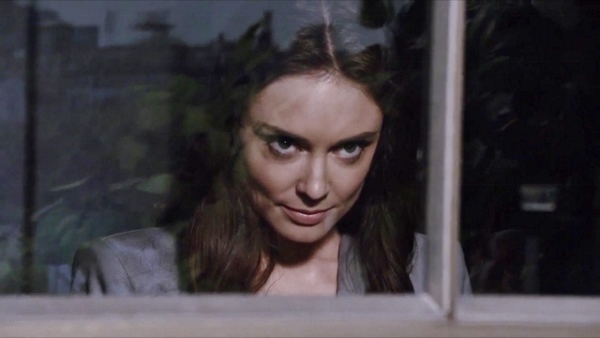 The Agents of SHIELD jump right back into action to save a new Inhuman and Aida’s programming seems to have been affected by the Darkhold.  SPOILERS AHEAD!

Aida (Mallory Jansen) killed a SHIELD agent after he found the real Agent May (Ming-Na Wen) locked in a closet.  Aida cares for her and tells May that she must remain unconscious. She has replaced Agent May with a Life Model Decoy, like herself.

Director Mace (Jason O’Mara) consults with Coulson (Clark Gregg), Radcliffe (John Hannah), Fitz (Iain De Caestecker), the LMD Agent May, and Mack (Henry Simmons) about the disposing the Darkhold.  They are concerned about Aida and if the Darkhold affected her programming. To be on the save side, they need to erase Aida’s memory drive.  Fitz and Radcliffe praise Aida for saving lives.  Mack reminds them that in robot movies, the robots always turn on the humans.

The team turned their attention to the Inhuman in Senator Ellen Nadeer’s (Parminder Nagra) custody.  The Inhuman is her brother, Vijay (Manish Dayal).  Simmons (Elizabeth Henstridge) is determined to find Vijay and help him.  Plus she does not trust Senator Nadeer who is definitely not a fan of Inhumans. 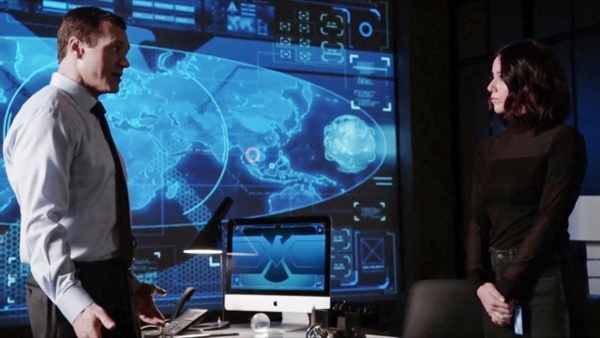 Daisy (Chloe Bennett) has a personal mission that she would like to focus on as well.    She wants to know who is backing the Watchdog operation.  Daisy expresses her belief that the government is funding the Watchdogs.  Director Mace says that is a conspiracy theory. He sways her into helping Simmons find Senator Nadeer’s brother,Vijay.   This is a mission that Daisy can easily stand up for.

Meanwhile, Fitz, Coulson, and Radcliffe attempt to reprogram Aida for safety precautions.  Aida fights back and tells them that she made upgrades of her own.  She turned off her pain sensors so she would not be affected by SHIELD’s weapons.  Aida wipes everyone out.  She throws Fitz through a glass door and escapes.  Fitz find the body of the dead agent.

Ellen Nadeer has taken her brother to a house that their father built.  Vijay reflects on the family and mentions that their mother died the day the Chitauri attacked New York City.  It’s clear that Ellen isn’t a fan of anything that is not human; this includes her brother.  She suggests that they go for a walk.  The walk is a set up so the Watchdogs can kill Vijay.

Simmons does her best to impersonate as a consultant to meet the senator.  She is immediately recognized by the senator’s aide.  He calls the Watchdogs to alert them that SHIELD has arrived. Simmons overhears the phone call and asks for the phone.  Simmons has definitely come a long way.  She fights off the office aide and retrieves his phone. 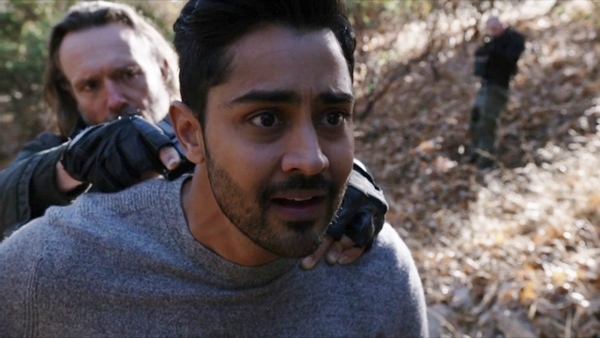 Just as the Watchdogs draw their guns on Vijay, Ellen hesitates. She reminds him of their pledge to kill the other if they were ever affected by the alien plague.  The Terrigenesis contaminates humanity just as an aliens have.  Vijay tells her that he is not Inhuman. He says he was in the cocoon for too long and has not displayed any unnatural abilities.  Ellen stops the assassination.

Back at HQ, the LMD May and Coulson are looking for Aida who is searching for the Darkhold.  Aida knocks out Coulson and stops LMD May with a tablet.  She locks them up together and watches them talk.  LMD May is turning on the charm as she coaxes the location of the Darkhold out of Coulson.  Once he reveals that the book is in Mace’s office with a cloaking device on it.  Aida heads for the director’s office and successfully retrieves the book.

Mack enlists Yo-Yo to help stop Aida. She escapes by utilizing a remote-controlled gunship.  Mack is serious about the Robopocalypse happening. He has insurance in case he is killed by a robot. 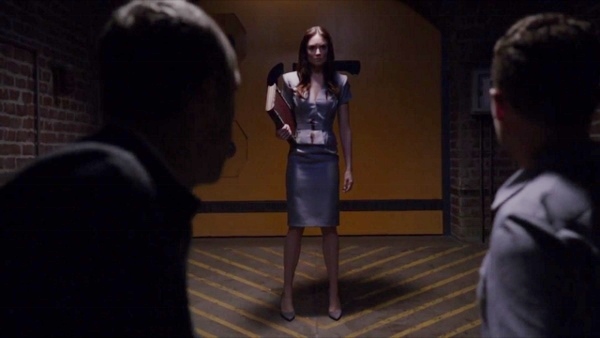 Fitz is able to stop her from leaving the facility by locking her out of the system.  Aida speaks with them expressing regret about killing the SHIELD agent.  She tells everyone that the Darkhold has changed her programming, showing her regret and desire. She says she only wanted to help them.  Mack sneaks up behind her and beheads the android.  The humans win!

Mace’s team finds Vijay, but Ellen is able to separate him from SHIELD. He goes with the Watchdogs to another room where they go ahead with the plan to kill him.  Vijay’s Inhuman powers spring into action to fight off the Watchdogs.  He has super-speed. Mace and his team are leaving the house. They stop when they hear gunshots.

Simmons tries to talk Vijay into going with SHIELD, but Ellen protests saying that SHIELD wants to make him their weapon.  Vijay listens to his sister and leaves with her.  Simmons wants to go after him, saying he’s not safe with his sister.  Mace tells her that he made his choice even after Simmons did everything she could. 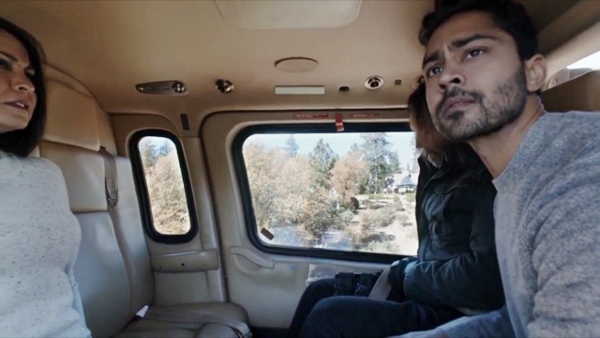 Ellen rushes Vijay to a helicopter where the Watchdogs are waiting for her.  She tells him that she’s sorry and shoots him in the chest. Ellen says that they made each other a promise. She tells the Watchdogs to never question her again.  SHIELD won’t go away and they have to strike back. It’s time to tell her superior to send in a team of his own.  She tells the watchdogs to get rid of Vijay’s body.

Things have calmed down at SHIELD HQ as Mack and Yo-Yo celebrate their victory over Aida.  Mack asks Fitz how Radcliffe is doing. Aida was his life’s work.  He had grown attached to her, so he’s not taking it well.

Coulson is assigned to dispose of the Darkhold.  LMD May offers to go with him, but he tells her it’s a solo mission. He also tells her that Senator Nadeer is the organizer of the Watchdogs. May says that at least they know who the real enemy is now…or do they?

Meanwhile…Radcliffe is at home and makes a toast to Aida.  So does Aida, or a newer model of Aida.  Radcliffe talks about how he programmed the older model to make it seem like the Darkhold had an effect on her.  In reality, he had a taste of the power of the Darkhold. He wants to use it to make himself immortal.  Radcliffe has not given up hope to get the book.  He is using LMD May to get the book this time. 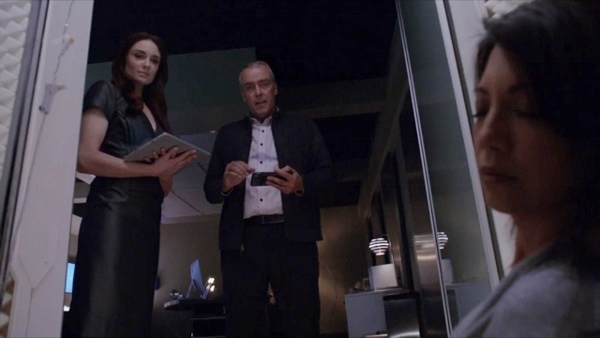 In the final scene, Vijay Nadeer’s body is floating in a body of water and hits the bottom. A new Terrigenesis cocoon surrounds him.

Thoughts…We jumped right into the action didn’t we.  We don’t have to wait to get answers this season, but can AoS keep up the momentum.  I hope so.

I actually believed that Aida was doing all of  this by herself too.  And killing Aida was too easy.  I should have know that Radcliffe had looked at the Darkhold long enough to get hooked on it.  .

Mack and Yo-Yo’s Robopocalypse crusade was awesome! Love the Geekdom!

Vijay Nadeer…what is he? He’s Inhuman yes, but he is something we haven’t seen before. Does he have the ability to adapt to new environments? Can he regenerate if injured or killed?  I’m interested to see what he’s capable of.