AGENTS OF SHIELD Recap: (S04E08) The Laws of Inferno Dynamics 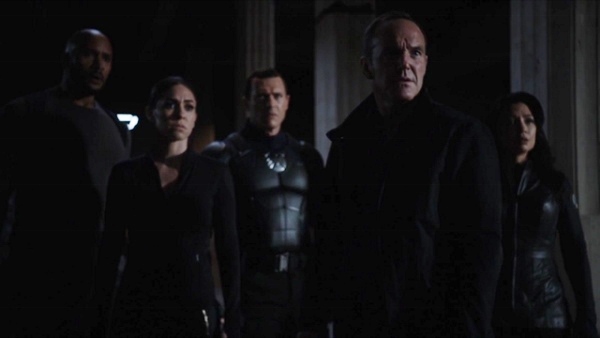 The Agents of SHIELD and the Ghost Rider unite to save Los Angeles.  It’s the Rider’s last stand!

Last week, Dr. Radcliffe was forced to reveal Aida’s secret. Aida read the Darkhold to save Coulson and Fitz. Robbie made a new deal with the Rider.

The team is back together to face the threat of Eli Murrow (Jose Zuniga).  Eli hired the Chinatown gang to protect him and his science project.

SHIELD knows where Eli is and has dispatched agents to his location.  Director Mace (Jason O’Mara) tries to contain the situation with the press who are speculating that Quake (Chloe Bennett) or other Inhumans are involved. 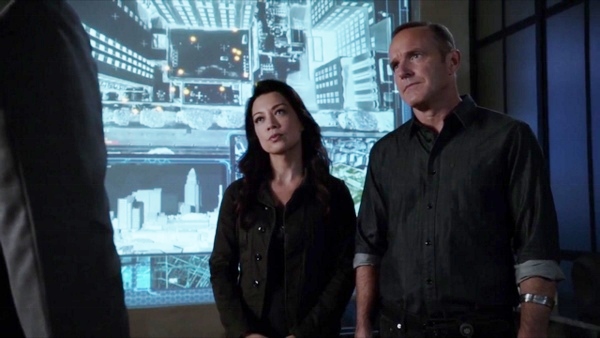 Mace, Coulson (Clark Gregg), and May (Ming-Na Wen) discuss their move against Eli.  Coulson reveals to Mace that Aida (Mallory Jansen) is an android and one of their best assets.  He asks for permission to use his team to contain Eli Murrow.  Mace agrees, under one condition.  Keep Quake (Chloe Bennett) out of sight.

Coulson’s team prepares to go into the building where Eli and the Chinatown gang are hiding.  Fitz (Iain De Caestecker) and Simmons (Elizabeth Henstridge) are in the Zephyr.  Quake, Yo-Yo (Natalia Cordova-Buckley), Mack (Henry Simmons), Robbie (Gabriel Luna), and Coulson are on the ground.  Simmons informs Coulson that Eli’s men have fallen back. Eli has something planned.  Quake, Yo-Yo, and Robbie, the assault team, go in first and barely escape an explosion.  Robbie goes back in alone to confront Eli. 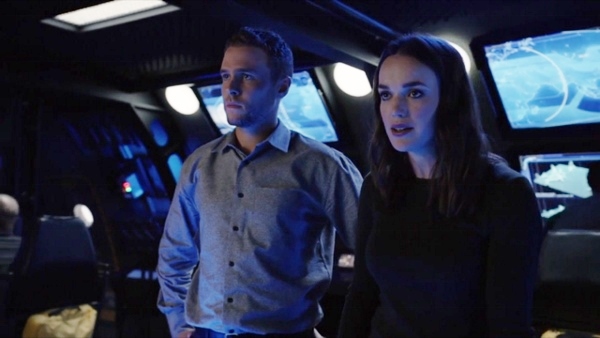 Director Mace wants an explanation about Aida and the book. Dr. Radcliff (John Hannah) explains that Aida’s technology was designed to save lives.  He assures Mace that his research belongs to SHIELD. Director Mace asks Radcliffe about the Darkhold.  Radcliffe tells him that the book is a powerful piece of technology that can read your mind. That’s why they had Aida read it. Radcliffe asks what Director Mace has planned for Aida.  He replies that it depends on her next mission.

YoYo was burnt a little in that explosion.  Mack tries to make her take it easy, but this just annoys her.  Coulson and Quake watch Robbie’s body cam. Robbie finds a large power cell filled with quantum energy.  Robbie steps inside the box. Fitz and Simmons watch the footage and see a device that Murrow built.

Robbie is affected by the elements in the box.  Eli tells him to go home.  Robbie tries to transform into the Rider, but Eli stops him by creating matter to stab Robbie..  Robbie’s camera goes off and Quake starts to rush in to save him.  An earthquake stops her.  She assures the team that she didn’t create the earthquake.

Simmons alerts the team to information that they need to see. The team head to the Zephyr. Fitz tells them that Eli has rebuilt something called the Demon Core. It’s a fail safe and a fuel source.  The device has a lid that will fall with the slightest touch.  When the lid hits the core, it will explode. 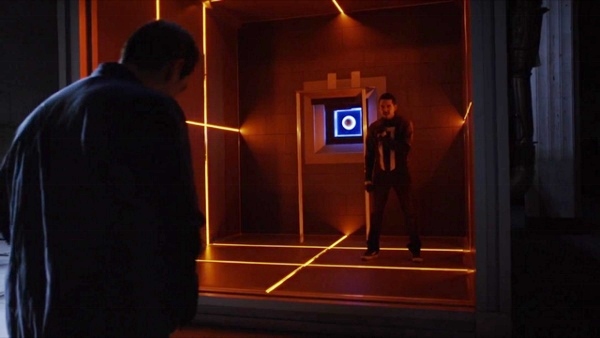 Robbie confronts Eli about the accident that left Gabe paralyzed.  He says that he became the Rider because of Eli.  Eli blames the Bowers, but Gabe tells him that it was all of them that caused the Rider to emerge. Robbie asks Eli why he became a killer.  Eli tells Robbie that the team at Momentum didn’t respect him.  So he took it. That’s why he did everything he did.  He wanted the power to create things or destroy them.  Eli tells Robbie that he is a god.  Robbie tells him that the devil is coming for him  Robbie tries to transform again, but Eli impales him again.

Director Mace delivers Dr. Radcliffe and Aida. May is with them.  Aida has brought equipment with them to use the power from the Darkhold.  Director Mace has decided to join the team on the front lines.  He says it’s time the public sees him in action.

Fitz checks Daisy’s gloves that help stabilize her when she uses her powers.  He tells her that she is not responsible for the seismic activity going on. They walk to Simmons lab and see Aida’s equipment. Simmons informs them that Director Mace will be joining the team.  Daisy observes that neither Fitz nor  Simmons like the director.  Simmons tells Daisy about the director sending her to work with the Inhuman cocoon for Senator Nadeer.  Daisy is confused why the director would work with the senator.

They are interrupted when Daisy feels an earthquake coming.  The epicenter is coming from Eli Murrow’s location.  Fitz explains that Eli is not creating something.  All energy has a place or origin and a destination.  It cannot be created…Fitz knows what Eli is doing. 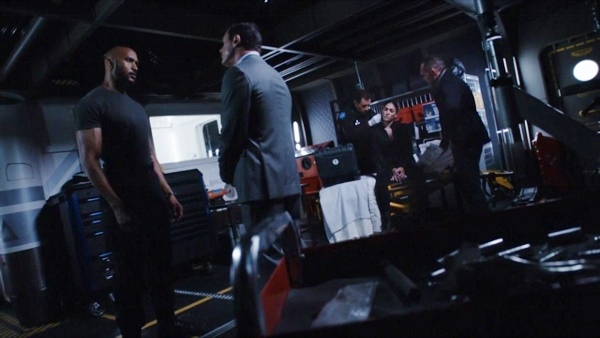 Mace plans to send YoYo back into the building to retrieve the plutonium that Eli has created. He wants to avoid an explosion that could decimate the city.  Mack doesn’t like his idea.  He doesn’t want to put YoYo in any danger.

Coulson and Daisy confront Mace about working with Senator Nadeer.  He tells them that Senator Nadeer had photos of Daisy and Robbie in the prison where they found the dead gang member. She was going to go public if he didn’t help her.  So he sent Simmons to help with Inhuman.

Coulson asks why Mace didn’t tell them in the first place.  Mace says they aren’t a team that trusts each other. They aren’t’ a team at all.   Coulson says it’s time they become a team so they can stop Eli from blowing up Los Angeles.  Daisy tells them that Fitz figured it all out.

Back on the ground, Eli shows Robbie what he is capable of. He wants to create life.  Coulson arrives with Eli’s men.  He tells Eli that he is not a god, but a thief.  Eli does not like Coulson’s assessment. He is convinced that he is above than the laws of science. 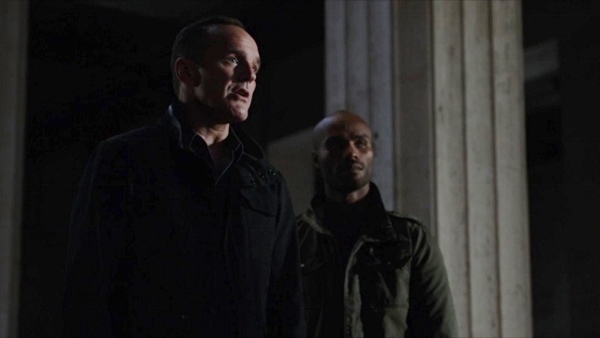 Eli is stealing the energy from another dimension, the Hell Dimension.  Robbie is feeling like he’s being pulled because he is in a box filled with quantum energy that doesn’t belong in this dimension. Everytime Eli steals that energy, it causes a seismic rift.  The earthquakes could cause the power cell to explode because of the plutonium inside.

Aida’s equipment is set up below the power cell. She will create a portal that will teleport Eli’s power cell/bomb to another dimension.  They are short on time though.  The earthquakes are increasing and getting stronger. Daisy is doing her best to control the quakes.

Eli refuses to believe Coulson.  The bomb is Eli’s end game.  Coulson realizes he can’t reason with Eli. He calls for all teams to go hot.  May, Mack, and Mace attack Eli’s men.  Fitz and Simmons put a magnet in place where the portal is built.  YoYo runs into to place the other magnet in the power cell.  YoYo slows down time as she runs to the power cell so that her team win the fight.

She places the magnet in Eli’s hands and pushed him into the power cell with Robbie.  Robbie transforms to the Rider.  Coulson throws a chain to Robbie to pull him out.  Eli tries to get out of the cell, but the Rider grabs him. 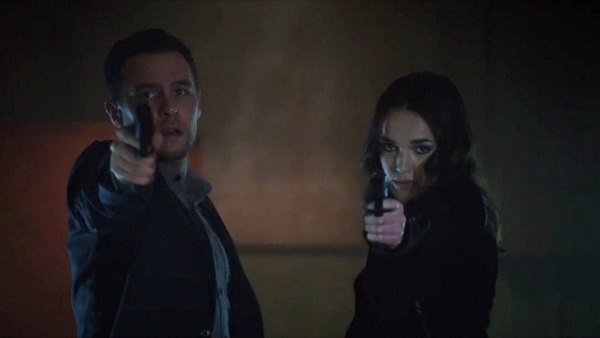 Downstairs, Quake cannot hold the earthquakes back anymore.  One of the gang members runs into the room.  He starts shooting at the team and Aida steps in front of them.  She falls.  Fitz and Simmons contain the situation. Aida is bleeding, but its synthetic blood.  Simmons is concerned that Aida appears to be in pain.  Radcliffe programmed her to display the same reactions as a human including feeling pain.

The Rider lets go of the chain just as the lid falls.  Eli begins to burn when the bomb powers up to explode. The portal pulls the power cell into another dimension before it can explode.  And Robbie went with it. 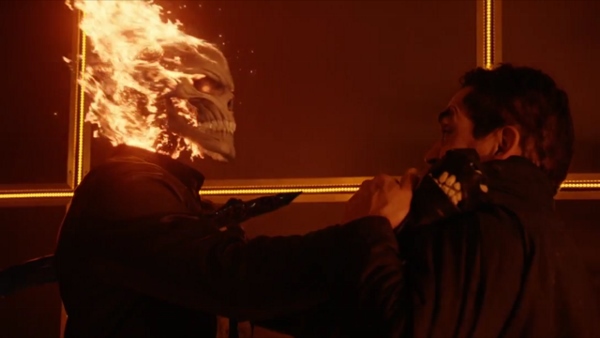 Daisy cannot contain all of the power absorbed from the earth quakes. She has to release it.  Quake goes outside and is thrown in the air.  She lands in front of the press.  Director Mace rushes to Daisy.  He tells the press that she was not the cause of the earthquakes. Instead, Agent Johnson saved everyone’s lives.

Back on the Zephyr, Daisy is preparing to take Robbie’s car to Gabe.  Coulson thinks Robbie will come back. The last Ghost Rider did.  Hmmmmm…

Coulson tells Daisy that if she doesn’t want to return to SHIELD that’s ok. She says she doesn’t like the bureaucracy, but she did miss the team.  She asks if making the new director an Inhuman was coulson’s idea. He said it was, but he had someone else in mind.  Daisy laughs…”maybe in the comic book version” ha! 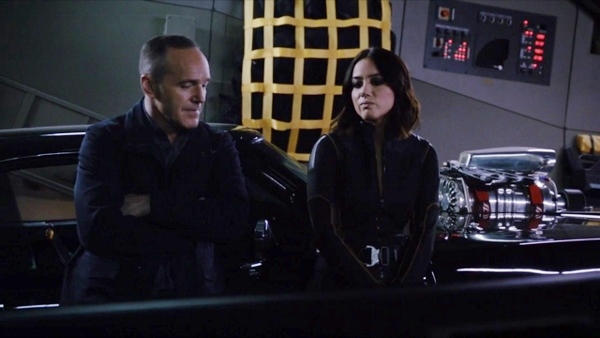 YoYo decides to leave the celebration. Mack stops her and tries to explain that he has gone through a dark time.  YoYo says that’s no reason for him to be so cold towards her. He’s giving her mixed signals. So he kisses her!

Simmons presents Daisy with her official lanyard to welcome her back to the team.

Mace tells Radcliffe that his LMD research is being brought to HQ. Mace wants him working under SHIELD supervision.

At Radcliffe’s lab, the agent sent to retrieve the research makes a shocking discovery.  Aida catches him looking in her pod.  She apologizes and kills him.  She is hiding a secret.

As we watch Agent  Coulson and Agent May finally share that bottle, we also see that the real Melinda May is being held captive by Aida! 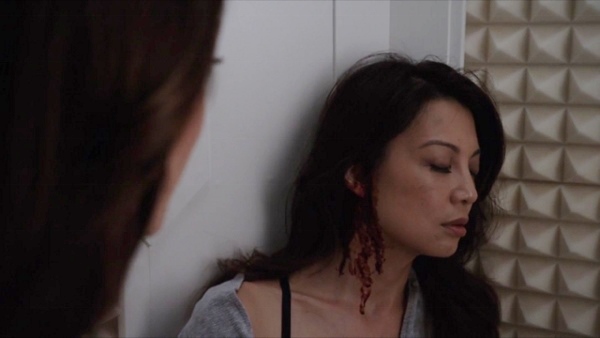 So the wrap up of the Ghost Rider story was fulfilling, but at the same time, kind of predictable.  I just wonder what will happen to Gabe now?  And will Robbie return? He was a nice addition to the team.  It’d be cool if he came back.

The biggest surprise was Aida and Agent May.  When did Aida have time to make another Agent May and place her on team? It’s obvious that Radcliffe’s work is so good that no one can tell the difference between android and human. That’s something Tony Stark couldn’t perfect.  But did he build the other May or did Aida?  And when? And why?  Did this happen when May was being cured for the ghost virus? Or when she retrieved Aida for the last mission?  So many questions! I can’t wait for Agents of SHIELD to return in January!