AGENTS OF SHIELD Recap: (S04E07) Deals With Our Devils 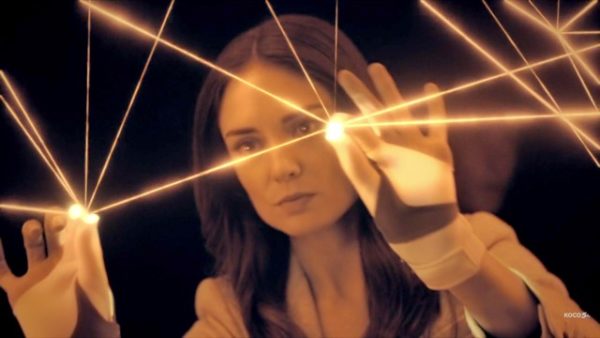 It’s been weeks since the previous episode of Marvel’s Agents of SHIELD.  We found out how Lucy Bowers became a ghost.  Eli Murrow gained a lot of power that caused an energy surge.  Phil Coulson, Leo Fitz and Robbie Reyes disappeared after that energy surge.  So here we are…wondering if they are alive or dead.  AND!! Where is Simmons? 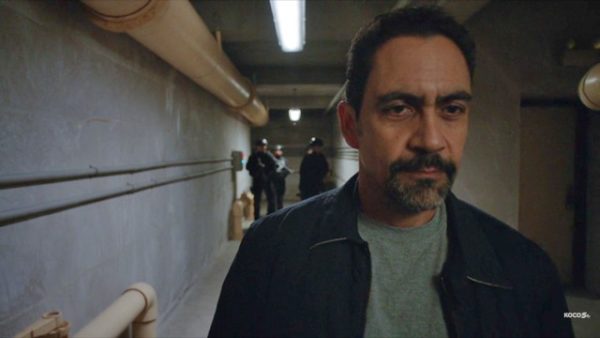 May (Ming-Na Wen) and Mack (Henry Simmons) lead the team back into the energy lab.  They can’t find Robbie (Gabriel Luna), Coulson (Clark Gregg) and Fitz (Iain De Caestecker). Eli Murrow (Jose Zuniga) is seen in the corridor.  He kills the SHIELD team and creates a barrier to keep anyone from following him.

Later the team watches the security footage. Coulson, Robbie, and Fitz all disappear when they were hit by the energy surge.  Director Mace (Jason O’Mara) tries to say something comforting and Daisy (Chloe Bennett) stops him.  She thinks they are still alive, but everyone else fears the worse.  Mack suggests to call Simmons. She will be able to figure out if they are dead or alive. They also need to find Eli and get him off the streets. 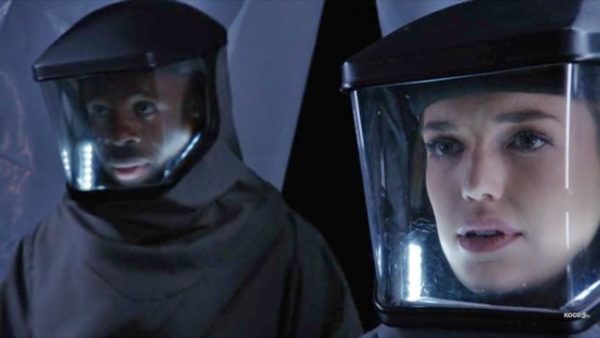 Simmons (Elizabeth Henstridge) was taken to a secret lab to study the terra genesis cocoon.  The subject has been gestating for seven month. The tech team is worried about what’s in there, more than who is in there.

Everyone is dealing with the loss of Coulson, Robbie, and Fitz in their own way.  May thinks Daisy may be right and suggests that they use the Darkhold to help them.  Mack reminds her that Coulson warned them not to use the book.  May says it might be the only way to save them.

Mace joins them to talk to Mack.  Mack says they got a tip that Eli may have hired the Chinatown Gang to let Lucy out.  Mace says they will eventually go after Eli but first they need to honor their dead. May asks about Simmons.  Mace lies and says he talked to Simmons but it will be awhile before she returns. 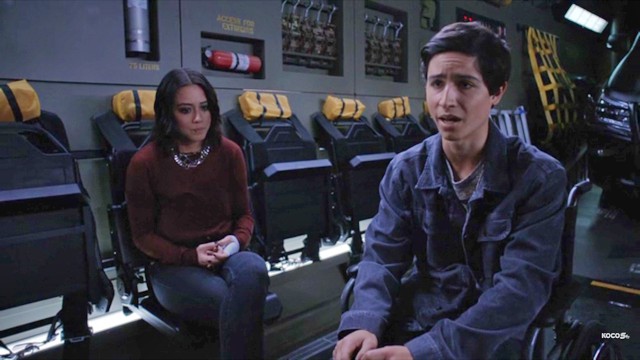 Gabe (Lorenzo James Henrie) is very upset. He says the two people he is closest to are gone. He feel like he never really knew either of them.  Daisy tries to give him some hope that Robbie is still alive.

Meanwhile Mack is walking around, and abruptly leaves on a motorcycle.  Daisy yells for him to come back.  She gets into Robbie’s car and takes off after Mack. 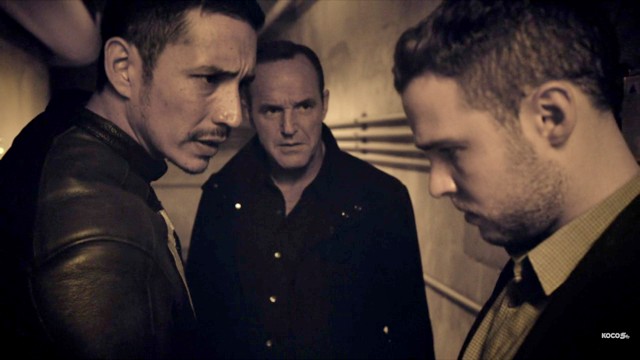 Robbie, Fitz, and Coulson were with the rest of the team the entire time.  At first they didn’t know that anything had changed.  Fitz figured it all out. When they were hit by the energy from the particle generator it put them in between dimensions.  They are actually further in the middle than Lucy was.  They do everything they can to try and communicate with the team.

Fitz knows that Mace sent Simmons somewhere dangerous and he cannot get a hold of her.

Robbie reacts differently than Coulson and Fitz. The Ghost Rider wants out.  He eventually gets out and enters Mack’s body. 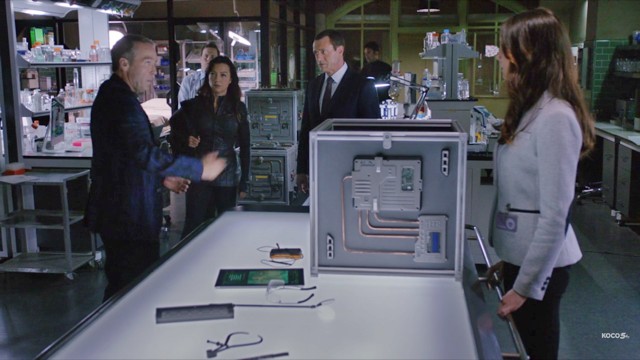 Director Mace is astonished that Mack and Daisy would take off when they have men to honor.  He takes May to Dr Radcliffe  (John Hannah).  Aida (Mallory Jansen) is with him and they are studying the energy boxes from the lab.  The boxes hold energy from multiple dimensions.

Coulson and Fitz watch as May gives the Darkhold to Dr. Radcliffe.  Dr. Radcliffe takes one look at the book and has enough sense to close the book.   May tells him that he’s the only one who can understand the science.  Dr. Radcliffe says the information in that book is too much for the human mind to bare. They continue to argue about using the book. 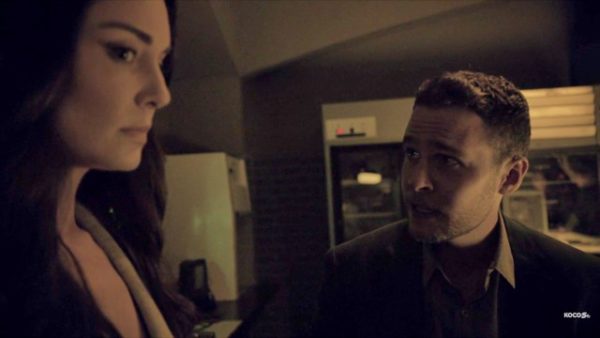 Fitz thinks Aida should read the book.  He yells enough at her that she finally hears the suggestion.  Aida settles the argument by volunteering to read the book.

Coulson is confused because the book will be just as harmful to Aida. Fitz fesses up at the same time that Dr. Radcliffe tells May that Aida is an android.

Simmons is studying the terra genesis cocoon. She tells the lead lab tech to lower the light. When he tells her no, she gets agitated, yells at the techs for disrespecting her and orders everyone out.  Simmons takes off her helmet and talks to the man in the cocoon.  She tells him that she is there to help him. Simmons touches the cocoon and his heart rate slows down.  The cocoon begins to crack. 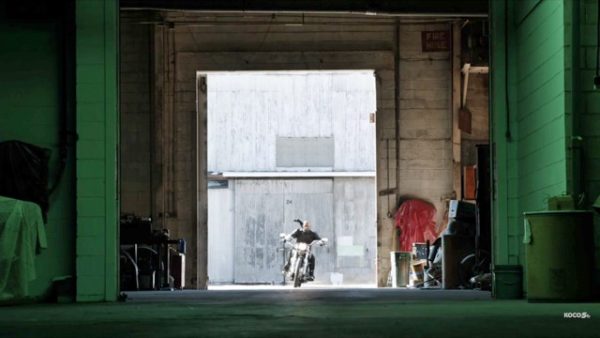 Mack arrives at the Chinatown gang’s lair.  A gun fight starts. Mack catches their leader and says he needs ‘a word.’ Daisy catches up to Mack and fights off the Chinatown Gang to get to him.

Robbie goes to find him too.  Mack is questioning their leader about Eli.  Robbie approaches him, but the darkness is gaining on Robbie.  He’s getting weak.  Mack acknowledges Robbie, but it’s not Mack. It’s the Ghost Rider. 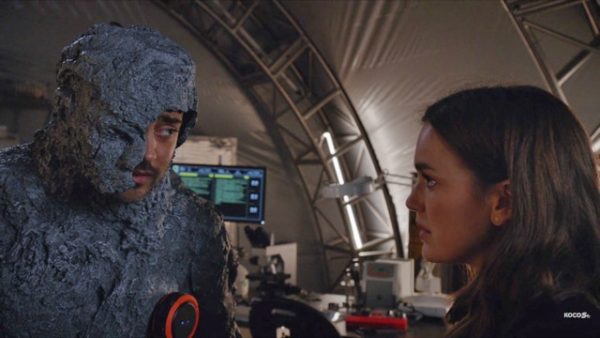 Simmons helps open the cocoon.  She sees the face of the man in the cocoon and he thanks her. She asks what his name is. Before he can answer, someone hoods her and drags her away.  One of the techs thanks her and says she is finished there.

Robbie says that they need to find Eli and that the Rider owes him his vengeance.  Ghost Rider says Robbie’s time is over and that Robbie’s neighborhood is soaked in blood that Ghost Rider spilt.  Robbie says he needs to be the one to take down Eli. Ghost Rider promises to meet Eli. 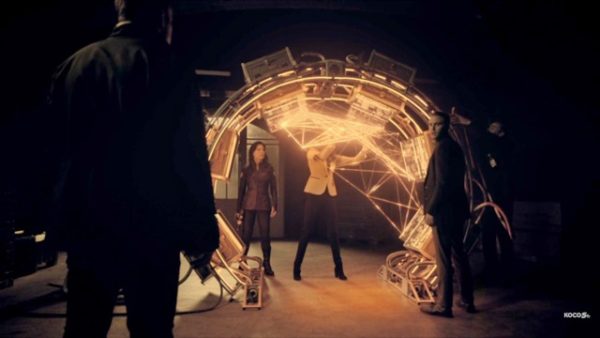 May, Radcliffe and Aida are building an inter-dimensional gateway.  Coulson and Fitz watch as Aida uses some new kind of magic to create the gateway. (Doctor Strange magic)  On the other side, May and Radcliffe only see Aida moving her hands around. They don’t see the web she is creating. She tells them they are out of time.  A hole opens up behind Coulson and Fitz catches him to keep him from falling into the darkness. 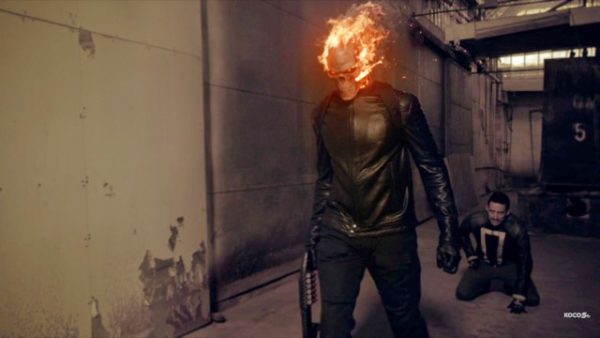 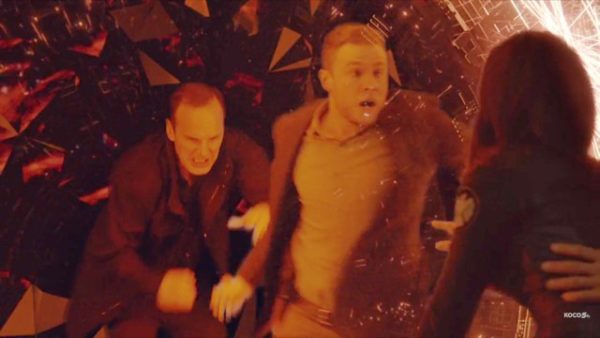 Aida has finished her portal.  Radcliffe turns on the power to activate it.  They see Coulson and Fitz fighting to get back to their reality.  Coulson sees the portal open.  Fitz gives one last big pull and they run to through the portal back to the correct reality. 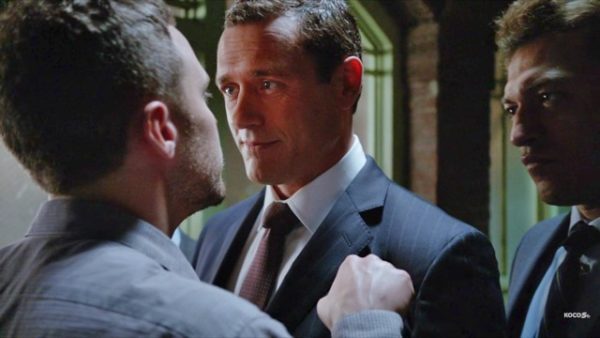 Back at HQ, Fitz is looking for Director Mace. He asks where Simmons is.  He wants to know where she has been.  Simmons arrives and the two embrace.

Daisy is leaving the Zephyr. She tells Coulson that Robbie took the Rider out of Mack.  She thinks Robbie is gone. Mack has a lead on Eli. They are going to follow up on it. 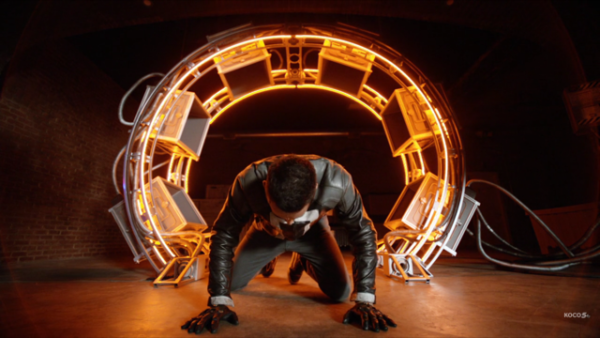 Mack is sitting alone, very upset about something.  He is holding a picture or paper or card that says ‘Hope  4/18/06.”  The portal opens up and Robbie appears.  Mack says he knew he’d being seeing him.  And he knows that Robbie is not alone.  Robbie stands up and asks Mack if he wants to help settle his last score.

I’m satisfied with what happened to Coulson, Fitz and Robbie.  There was a lot of science behind it but the most interesting thing was Aida.  Using her to read the Darkhold was genius.  Not only because she wouldn’t be affected by the book, but she can also read that book faster than anyone.  Even though there was no direct connection to Doctor Strange other than the magic, I was happy that Team SHIELD didn’t lose over the magic in the Darkhold.

Take a look at a preview for next week’s winter Finale!