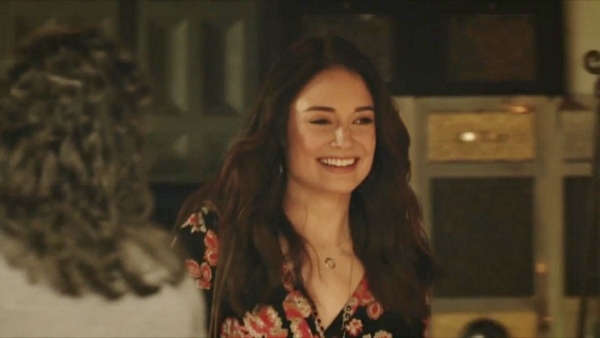 The Agents of SHIELD continue their search for May and the Darkhold.  Coulson uses Radcliffe’s past to lure him out of hiding.

Agents Coulson (Clark Gregg) and Mack (Henry Simmons) are in Spain looking for a special lady that will lead to the whereabouts of  Agent Melinda May (Ming-Na Wen).  Her name is Agnes Kidsworth (Mallory Jansen).  She is the inspiration for the Life Decoy Model, Aida.  Coulson starts up a conversation with Agnes.  He lets her know that he knows she worked with Radclife.  She says she wants nothing to do with Holden Radcliffe.  Mack shows her a picture of Aida.  Aida hears them out. 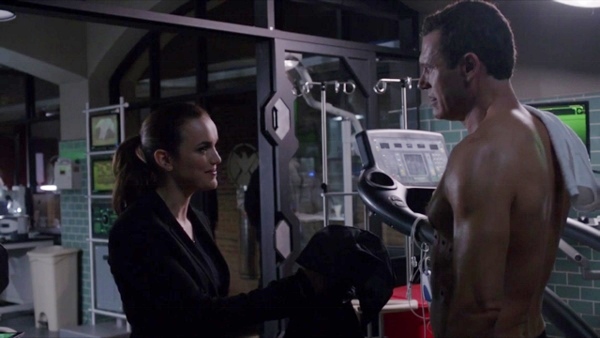 At HQ, Director Mace (Jason O’Mara) is undergoing some testing. Gemma Simmons (Elizabeth Henstridge) tell him that if he uses the strengthening serum, it could cause him to have a heart attack.  Leo Fitz (Iain De Caestecker) interrupts them with a new suit for Director Mace that has an serum injector, heart monitor and GPS device. Simmons tells the both that the Director cannot use the serum again.

Mace checks in on Agent Daisy Johnson.  Agent Johnson is working on relocating all of the known Inhumans.  Mace says Nadeer will ask for their new locations. Daisy doesn’t care. The Inhumans count on SHIELD to keep them safe.

Coulson calls in to report that they found who they were looking for.  Mace tells Coulson that he feels helpless. Coulson says Mace just has to find a new role. His time will come.

Senator Ellen Nadeer (Parminder Nagra) is visited by the Watchdog leader Tucker Shockley (John Pyper-Ferguson).  Shockley thinks that Senator Nadeer is Inhuman.   He breaks a Terrigen crystal and nothing happens to Nadeer.  It’s Shockley that goes through the Terragenesis.  The senator laughs as he is covered in a husk.  She is silenced by an explosion that takes her life. 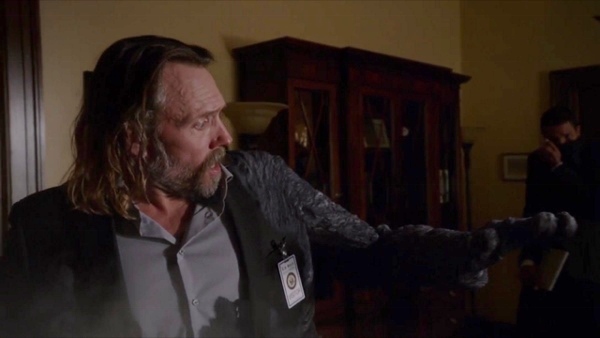 Anges tells Coulson and Mack that she is the one thing Radcliffe could not fix.  She has a brain tumor.  Radcliffe failed to help her.  He left because he couldn’t deal with his failure.  She moved to Spain to live out the rest of her life in peace and without pity. She has no interest in reuniting with Radcliffe and leaves. Coulson wants to force Agnes to help them. Mack insists that they let her go. Coulson is determined to find May and Agnes is the closest he has come.  Mack tells him that May wouldn’t want him to take unnecessary risks.  Coulson doesn’t listen and goes after Agnes without Mack.

SHIELD hears about the explosion at Senator Nadeer’s office. Daisy speculates that Nadeer set off the explosion to anger the public about Inhumans.  The news reports that Senator Nadeer is among the dead.  Daisy, Fitz and Simmons go to investigate the explosion. Fitz and Simmons do not find any evidence of a bomb. They take samples of everything to solve the mystery.  Daisy watches a security surveillance video.  She recognizes Shockley going into Nadeer’s office.  The team knows the Watchdogs had something to do with the explosion, and they possibly made a bomb using the Darkhold.

Shockley is alive.  He heads to a Watchdog safehouse where the Superior is waiting for him..  Shockley tells him that it was Nadeer who turned and she exploded.  The Superior believes him and says that SHIELD will come for him.  Shockley vows to take SHIELD down with him.  Daisy leads a SHIELD team to the safehouse and captures Shockley.

Coulson visits Agnes. He tells her that Radcliffe took May from him and replaced her with an android.  He says that he isn’t sure if May is alive.  Agnes tries to defend Radcliffe. Coulson says Radcliffe is under the influence of something dark and powerful.  He says the real May is a lot like Agnes.  She deserves to live  her life on her own terms.  Agnes asks what Coulson needs from her. 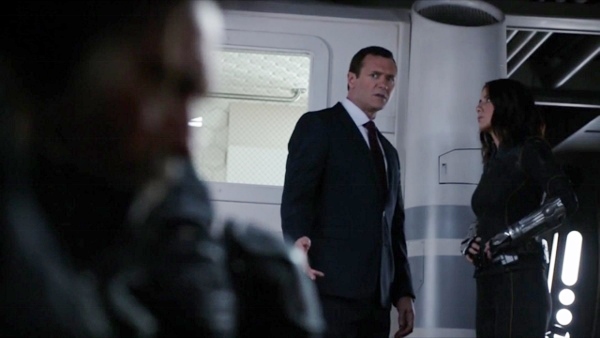 In the lab, Fitz and Simmons find residue of a terrigen husk. They know it was an Inhuman that set off the explosion.  That Inhuman is Shockley.

Fitz and Simmons run to the cargo bay just in time to warn everyone.  Shockley is pushed into a containment module and released from the quinjet.  He explodes, but narrowly misses destroying the quinjet.

Radcliffe gets a super secret message and is agitated by it.  Aida recognizes his strange behavior.  He explains that the message is from the woman who Aida was designed from.  She needs Radcliffe’s help and he rushes to meet her. 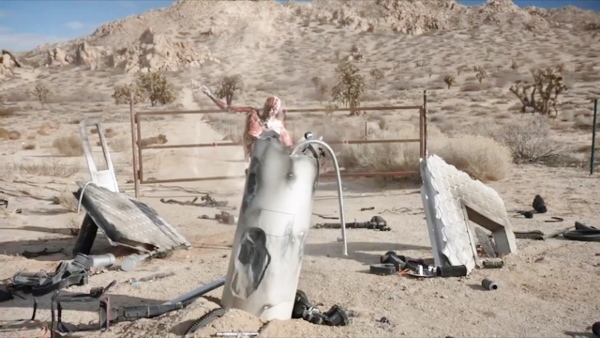 The containment module crashes and Shockley emerges.  He is in some form of gaseous state that reforms his body.  A local man finds Shockley and offers his help.  He goes to a nearby hotel and uses the phone.  Shockley calls the Superior, Anton Ivanov.  Ivanov is suspicious of Shockley and asks how he escaped SHIELD. Shockley admits to being an Inhuman.  He says he will deliver SHIELD because he is a soldier in the war to protect humanity.  He explodes so SHIELD will find him.

Mace thinks he needs to be a full strength to avoid situations like what just happened.  Fitz and Simmons show Mace and Daisy the security footage of the explosion.  Shockley’s cellular vibration causes a high pitch noise as he transforms from solid to flammable gas and back again.

Daisy can absorb counter vibrations so she may be able to stop Shockley.  FitzSimmons work on a device to contain Shockley. Daisy has to practice absorbing counter energy. 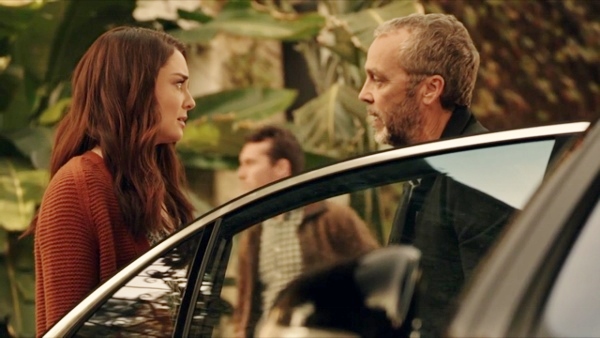 In Spain, Agnes waits for Radcliffe. Coulson and Mack are nearby in a van.  Radcliffe sends a cell phone instead of showing up. He tells Agnes that there are people after him.  Agnes says she called him because she wanted closure. Radcliffe says he found a way to save her.  He tells her to start walking.  Coulson knows that Radcliffe is near so he instructs Agnes to do as Radcliffe asks her to do. As they talk, Radcliffe apologizes for leaving the way he did.  He tells her he found a way to cure death.  He says he built a framework that would give her a full and happy life.  Agnes destroys the comm link and leaves with Radcliffe.

Daisy goes to face Shockley.  She uses her power to trigger Shockley’s, causing him to have to regenerate each time.  The process is exhausting for both. 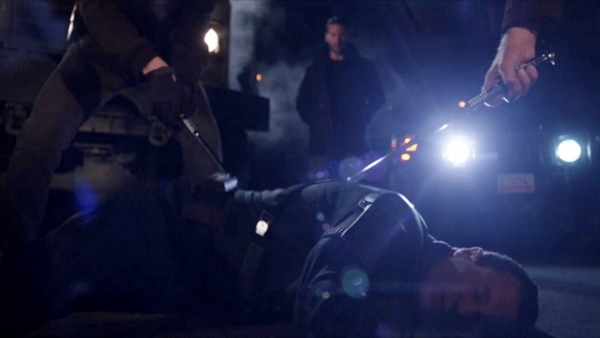 Coulson accepts that they lost Agnes.  Mack says he understand how hard it is to let go of May.  Coulson says he is never letting go. May is alive.

Radcliffe hooks Agnes up to the same Framework that May is in.  Agnes’s body dies while her consciousness lives in the Framework. Radcliffe is sad, but happy at the same time that he was able to save her in some way. Radcliffe leaves and Aida takes Agnes’ necklace. 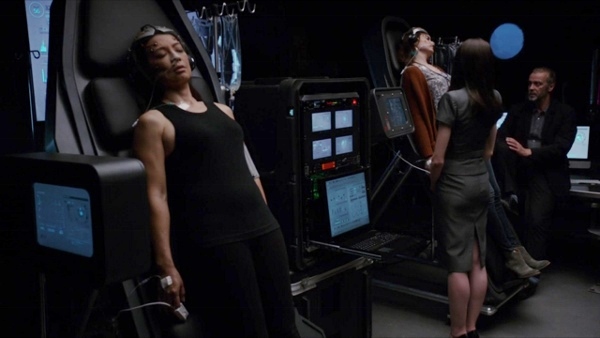 I was slightly bored with this episode.  I didn’t see how it really moved the story forward.  May is still missing.  Coulson doesn’t know where she is.  The Superior and Radcliffe are still at large too.  There was one loose end tied up.  Senator Nadeer was killed in an explosion.  However, there’s still the question about her brother.  Remember he fell to the bottom of the ocean and a Terrigen husk surrounded him.  So if the Senator is gone, are they just going to abandon her brother as well?  I hate when that happens.

I’m ready for the team to find  May and Mace too.  This battle between SHIELD and the Watchdogs needs to happen quickly.

Check out the preview for this week’s episode of Agents of SHIELD: