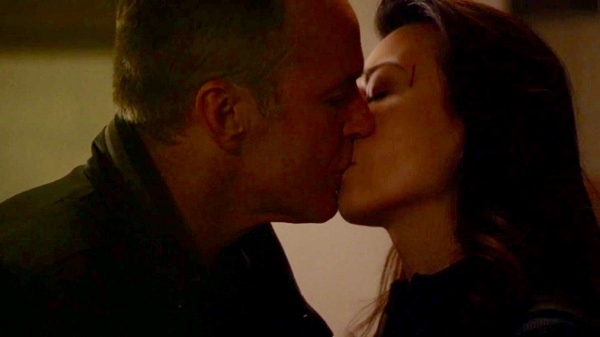 Last week, SHIELD got closer to finding out who the mole is. The Koenigs were back and in a lot of trouble.

SHIELD just isn’t SHIELD without the Koenigs.  Unfortunately, the Koenigs are in desperate need of saving.  Billy Koenig (Patton Oswald) gets captured by a group of armed men.  His brother Sam (Patton Oswald) , escapes and immediately alerts SHIELD.

Agent Coulson (Clark Gregg) believes Billy was taken because he entrusted the Koenigs with keeping the Darkhold safe.  The agents must find the Koenigs and take them to a safe place. 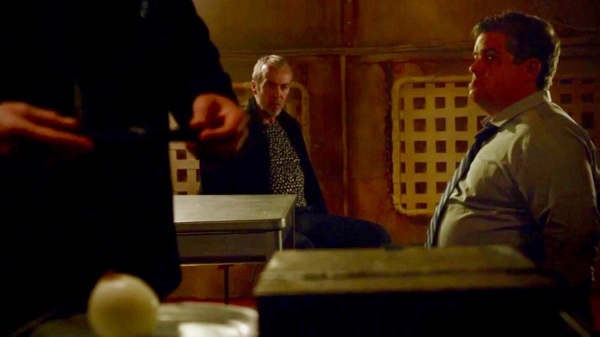 Billy is held captive with Radcliffe (John Hannah) on a submarine. Everyone at SHIELD is not aware that there two Radcliffes, the real doctor and his Life Model Decoy. The LMD is currently in SHIELD’s custody and being studied by Fitz (Iain De Caestecker).  The real Dr. Radcliffe is pretending to be a prisoner as well.  He strikes up a conversation with Billy to find out where the Darkhold is.  The Superior (Zach McGowan) arrives and threatens Billy.  Radcliffe gives up his cover when he stops the Superior from hurting Billy. They have to find another way to get the information they need.

Back at HQ, Fitz studies LMD Radcliffe to find out how the LMD programming works.  Simmons (Elizabeth Henstridge) and Mack (Henry Simmons) join him to try and get more information, but LMD Radcliffe refuses to discuss his programming.  Fitz tries every way he know to hack the programming.  The LMD begins speaking in other languages and even starts singing like a bird.  Fitz just can’t figure it out. 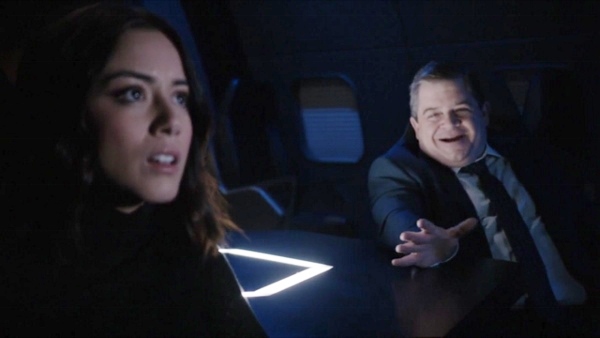 Daisy (Chloe Bennett) works on getting information about the men who took Billy. These men are the same guys who tried to abduct the director.  The men also have ties to the Russian Prime Minister who exposed Bobbi and Hunter.  The main connection between the Nadeer’s men and Russians is the desire to get rid of Inhumans.  And they want to use the Darkhold to do that.

The Real Radcliffe uses brain-mapping technology to see Billy’s memories.  He sees Billy hand a bag to Sam.  He knows the Darkhold is in the bag and thinks they have the wrong Koenig.

Back at HQ, Sam tells Coulson, May and Daisy that he gave the book to LT, not Billy.  The original Agent Koenig that brought Billy and Sam to SHIELD.  Coulson says they need to get LT.  No Koenig is safe! The team finds LT and non-SHIELD brother Thurston (Patton Oswald) in the process.  LT turns out is the Koenig’s sister and she’s pretty tough.  LT (Artemis Pebdani) tells the team that she gave the Darkhold back to Billy in Operation: Hot Potato.  They determine that if Billy had the Darkhold it would be in the labyrinth at the Koenigs’ secret base. 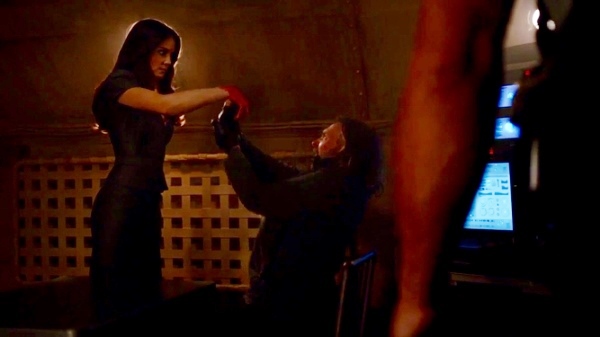 Radcliffe finally sees Billy’s memory of taking the Darkhold to a safe place. He also sees the access codes to get in.  Radcliffe tells the Superior to turn the ship around.  The Superior doesn’t take orders, he give them.  Aida has to persuade the Superior and his men with brute force. The Superior thinks she’s an Inhuman.  Radcliffe explains that she is a machine and built to last.

Simmons goes to check on Fitz.  Fitz says he feels like he’s in a loop of betrayal; his dad, Ward, and now Radcliffe.  Simmons says that he was never broken because he is more than his programming.  Her words make Fitz realize the answers he was looking for. 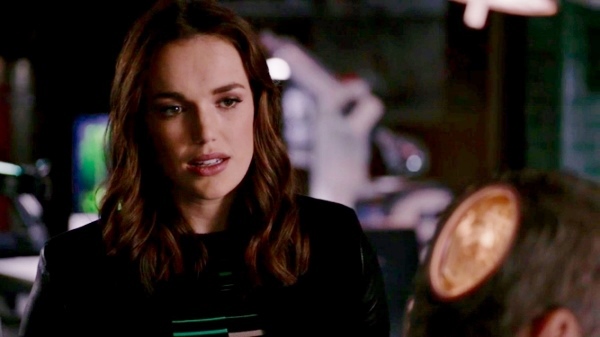 Fitz opens up LMD Radcliffe’s head. He realized that the code in the programming was gibberish.  LMD Radcliffe is run by a function brain.  LMD Radcliffe gives all the credit to Aida and the Darkhold.  He says everything from the original “brains” is contained in the quantum brains.  Simmons points out that he said “brains” meaning there is more than one LMD.  She was there when the real Radcliffe mapped another brain…May’s brain.

At the Koenig’s secret base, Sam goes to retrieve the Dark Hold from the Labyrinth leaving Coulson and May alone.  Chit chat about books turns into flirting.  Flirting leads to a kiss!  They are interrupted by LT. Radcliffe and the Superior’s men have arrived…with Billy.

Sam emerges and hands the Darkhold to LMD May. Coulson asks for the book so May won’t be the target. May pulls a gun on Coulson and says she can’t give him the book. 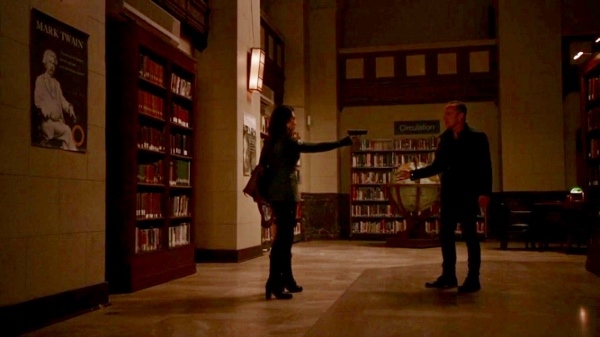 Coulson asks for the book.  May tells him No…she can’t go against her programming. Daisy shows up to take out the LMD.  Fitz and Simmons were able to contact Daisy.  “So May’s a freaking robot.”

The Superior’s men face the Koenigs and ask for the book.  Coulson shows up and just hands it over.  They release Sam and Daisy attacks the goons. She slides the book back to Coulson.

One of the goons takes out Daisy, long enough for Billy to grab the bag.  He runs and finds May crawling on the floor screaming for help.  She knocks out Billy and grabs the bag.  Radcliffe shows up and take the bag from May. LMD May begs Radcliffe to take her with him. Unfortunately, LMD May was not built to last. 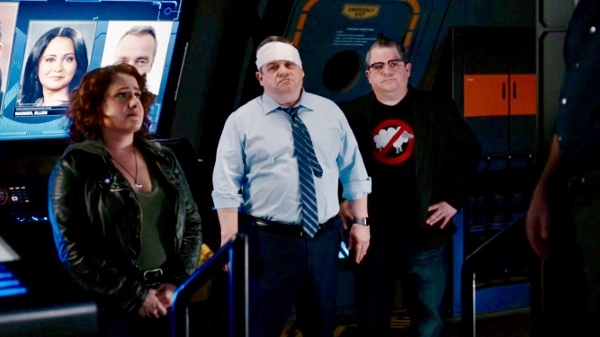 Back at the base, and a lot of talk of whether or not the Koenigs are robots.  Apparently they did influence the LMD program.  The LMDs are disposed, but not LMD May. Coulson couldn’t destroy it because it is all they have left of her.  Daisy promises Coulson, they will find her.

Aboard the submarine, Radcliffe shows the Superior the Darkhold.  The Superior shows Radcliffe pictures of a man that he has been tracking.  He thinks this man is responsible for everything alien that has happened on Earth: the Chitauri, the Kree, and Inhumans.  He says the man is dead, but still appears in strange situations.  Radcliffe assures him that this man is not dead and he can deliver the man to the Superior. That man, is Agent Phil Coulson.

Number two: I know everyone has shipped them together, but I cringed at watching May and Coulson kiss.  Maybe because I see them more like siblings than colleagues.

I feel like everyone is out of focus. Maybe it’s because there’s too much coming at them at once.  But now that they know the truth about Radcliffe and May, they can concentrate on that.   First they have to find the Real Agent May.

I love the Koenigs.  Can we just keep one of them on the team?  It was especially funny to hear Sam tell Daisy about the fanfiction shipping her with Black Widow. I’m sure that’s true.