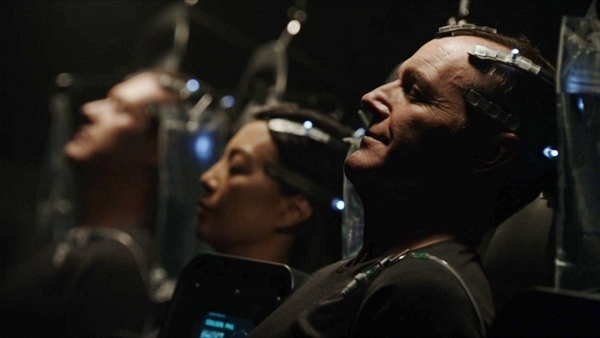 Aida has taken the SHIELD agents to the submarine and put them in the Framework.  She has the Superior on an operating table.  Ivanov wakes up and objects to Aida’s plan to replace him.  He does not want to be uploaded to the Framework like the others. Aida agrees and lets him know that her plans are much more extreme.  She picks up a chainsaw and goes to work on a screaming Ivanov. 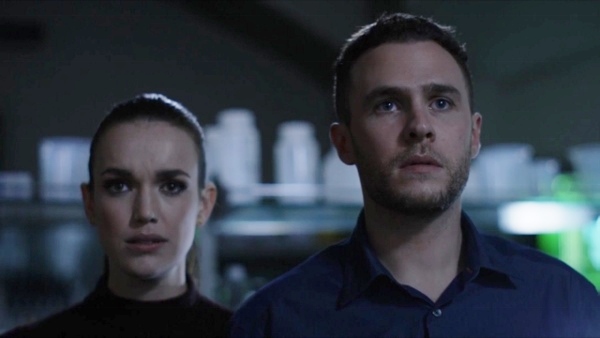 Back at SHIELD HQ, Fitz and Simmons are very uncomfortable around the LMD agents, but are trying to act normal.  LMD Mack suggests that they bring in all of the registered Inhumans.  Daisy agrees and volunteers to contact them all.  Mack tries to split up Fitz and Simmons. Fitz stops him by insisting that he needs Simmons to decipher a Russian communication device.

After the team splits up LMD Mace tells LMD Coulson that they need replace the last two members of the team as soon as possible. Their plan is to lure the registered Inhumans to HQ and terminate them on site..including Yo-Yo (Natalia Cordova-Buckley).

In Coulson’s office, the conversation between LMD Coulson and LMD May makes her realize that they are different. LMD May was not aware that she was a robot until late in her mission. LMD Coulson is aware and his fine with it. He says that in the Framework gives them the chance to wipe away their regrets.  Coulson regrets getting into the spy game instead of  living a normal life.  May regrets choosing Andrew over Coulson.  Coulson tells her that in the Framework, they can be together.

Fitz and Simmons try to determine how Radcliffe was able to create the LMD bodies so quickly.  They think he must have used the LMD May Deathlock eyes to study everyone.. They walk through another LMD detector and it goes of. Each suspects the other of being a robot.  Simmons pulls her gun on Fitz and tells him to cut his wrist to prove he’s not a robot.  Fitz does as she requests and starts crying. He tells Simmons that he cut a key artery in his arm. When she goes to help him, he turns on her, knocking her out. Fitz is an LMD.

Back on the submarine, Aida wakes Radcliffe and shows him that she has captured and replaced four SHIELD agents: Director Mace, Agent Coulson, Agent Mackenzie, and Leo Fitz.  They are all hooked up to the Framework next to Agent May.  So that means that Daisy is still Daisy!

Simmons wakes up to LMD Fitz trying to connect her to the Framework.  LMD Fitz is telling her they can be together forever in the Framework.  Simmons makes the observation that this is the first time LMD Fitz has said anything about marriage.  She tells him she will save her answer for her real boyfriend.  Simmons stabs LMD Fitz in the heart until he shuts down. 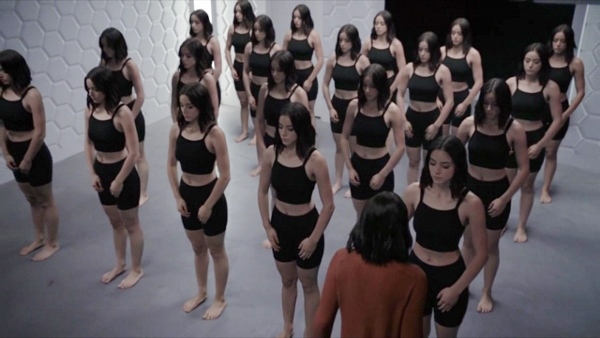 LMD Mack and Daisy are preparing for the arrival of the Inhuman.  Daisy slips away to check on the accommodations and finds many robotic copies of…her.  Mack races to intercept her and finds the duplicates. He knows the Real Daisy is in there.  He thinks he has figured out which of the copies is the real deal. Nope, Daisy tricked him and knocks him out with a quake blast. She takes her tablet and runs away to watch the security feed.

LMD Mack reports that Daisy knows that Mack is an LMD.  LMD Coulson tells him to patch LMD Fitz enough so that he can fix himself. They have to secure the base and cut the security feed.  Daisy’s tablet goes blank.

Daisy looks up and see blood on the floor. She follows the blood and finds a very shaken Simmons.  The LMDs are looking for Daisy and Simmons.  To prove to Simmons that she is not a robot, Daisy pulls Simmons into a hug.  Both are relieved to know that they are still human and Inhuman. 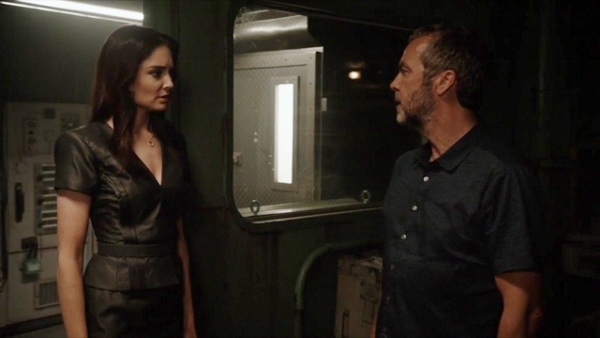 Aida shows Radcliffe the construction of a new LMD. Radcliffe says the Russian won’t approve.  She says his behavior proves otherwise.  Aida has witnessed a lot of human behavior and there is no logic to it. She says that human emotions have created a paradox in her programming.  Aida is programmed to protect the Framework and keep Radcliffe alive. She says that Radcliffe is the greatest threat to the Framework.

LMD Coulson, LMD Mace and LMD Mack order all of SHIELD to find Daisy and Simmons.  Meanwhile the two ladies are talking about ways to save the team.  Daisy sees containers of sleeping gas. She releases the gas in the building, knocking out everyone but the LMDs.

Simmonsuses an anecdote to wake up some of the SHIELD agents.  They don’t believe that she isn’t an LMD. Simmons forces them at gunpoint to help her.

Daisy comes face to face with an enhanced LMD Mace. She uses her powers to make some pretty slick moves.  Daisy is able to stop LMD  Mace, but LMD Coulson and LMD Mack show up and shoot her.  Daisy uses her Quake powers to blast the skin off of LMD Mack. LMD Coulson is knocked out. 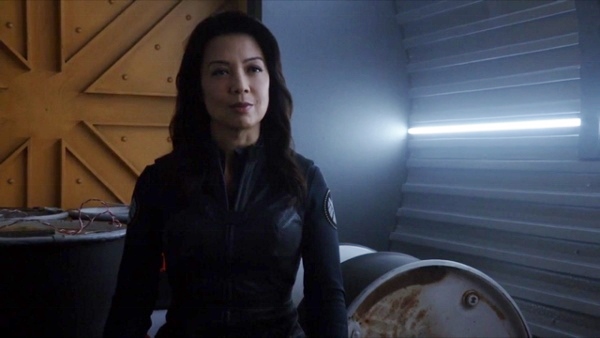 LMD Mack’s robot body lands in front of Simmons and the SHIELD agents. Now they believe her.  Daisy instructs them to get all of the unconscious bodies out of HQ. Daisy and Simmons head to Zephyr to set up equipment to plug into the Framework.  LMD Coulson is one step ahead of them. They run into LMD May sitting on a barrel of explosives.  Daisy and Simmons appeal to LMD May.  LMD May says she won’t regret her decision

Team LMD regroups, joined by a fixed LMD Fitz.  Coulson tells him to activate the Daisy duplicates to seek and destory.  Coulson joins May, but May has let Daisy and Simmons go. She realizes that she is not the Real May and he is not the Real Coulson. They have different programs.  She knows she’s not real, but she still feels pain and regret.  Pain and regret are what makes them people. Her original programming came from Radcliffe.  That she has served his purpose.  Now her impulse is to keep Coulson safe and close.  And he (LMD Coulson) is not Coulson. She blows up HQ just as the Zephyr takes off.

Yo-Yo has joined Daisy and Gemma. Daisy explains that Radcliffe and Aida were able to create a duplicate world using the Darkhold. They are going into the Framework to find the rest of the team and wake them up.

Once inside the Framework, Daisy wakes up in a bathtub. She gets a message to wake up her boyfriend because they are being called in.  She thinks it’s Lincoln.

Coulson is a teacher.

Fitz is rich and famous.  He gets out of a car and reaches for someone’s hand. Who’s hand is that?

Mack is a family man.  His daughter is still alive and he is very happy.

May is an agent…for HYDRA?

And The Superior, Anton Ivanov is now an LMD, but much more durable than the original.  Aida explains that his mind was untouched.  His body is mechanical but remotely linked to the head of the human Ivanov.  She needs him to help protect the Framework. She gives him the Darkhold.  Aida says he’s the perfect machine controlled by a mind with the ability to feel love, anger, wonder and joy.  He asks when he will feel joy. She says he will feel joy when she is able to feel those things. 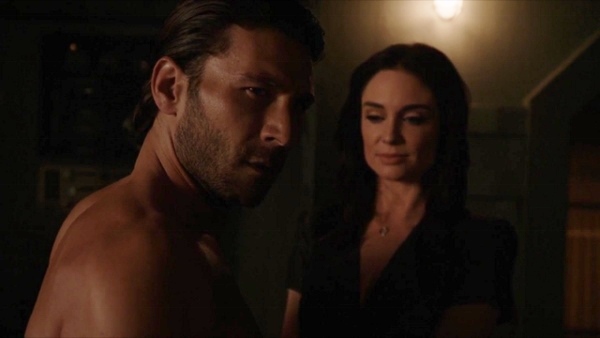 Whoa! A lot happened in this episode.  The team is totally dismantled, Aida has just gone LMD crazy and Jemma!!! What was her regret that caused her to be dead in the Framework?!?!?!

I will admit. I am enjoying Zach McGowan’s performance on AoS.  He seems to be everywhere lately…Black Sails, The 100…all different characters, but all with a little bit of angst to them. Much different from his role on Shameless.  I kind of wish he would stick around. But we all know this robo-pocalypse will end soon.

I have so many questions, that I hope will be answered next week.

Agents of SHIELD returns April 4. Until then, check out the trailer for the next episode and the return of Ward!