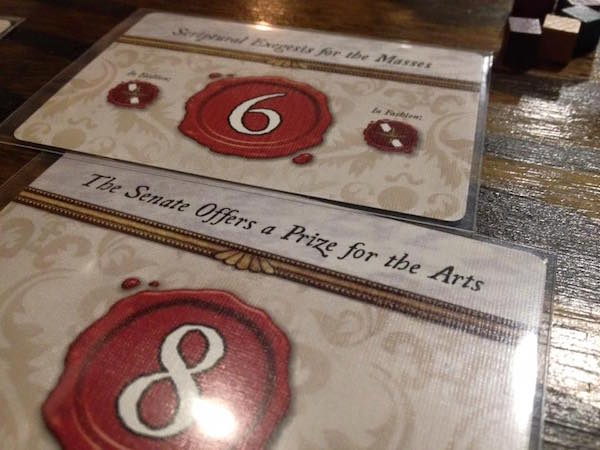 With Love Letter, Alderac Entertainment Group gave us the gateway game of all gateway games. Whenever someone curious asks me to play one of “my” games, I almost always grab Love Letter, because I know they won’t be disappointed, and their curiosity over modern day board gaming will likely be stoked. Over the last couple of years I’ve probably played Love Letter a hundred times. So, it was to my surprise that I somehow missed Patronize, anther small box game by AEG in the same “world” as Love Letter. I came across it a couple of weeks ago and finally got a chance to play it. I was happily impressed.

Patronize is for 3-5 players and takes about 15 minutes per game.  Players are nobles trying to recruit artists, scientists, philosophers and such into their folds, in order to garner the most fame at the end of the game.  The game contains only 17 cards that can be played, numbered 1-17.  No two cards are identical and most have one of 4 unique trump symbols.  Most cards provide a scoring bonus at the end of the game, usually surrounding one of the four different colored cubes that you earn throughout the game.  Players’ hand size depends on the number of players.  We played a 3-player game and so we each had five cards.  That meant 2 of the 17 cards were not used in the game, making card counting more difficult. There are 7 “fame” (victory point) cards in the game that players will vie for.  4 of these 7 cards also have a trump symbol.  In the 3-player game we used all of them.  You always use two more cards in the fame pile than the number of cards players have in their hands.  So in our case, it was 5 cards in hand and 7 fame cards we were trying to acquire. 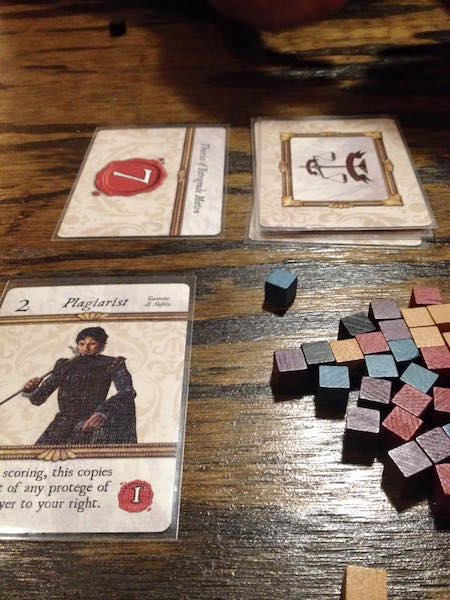 Each round, a fame card is turned face up. Players then either play a card from their hand, or pass. People who played cards are called “participating” players. Once any cards are played, the participating players resolve them, with the highest numbered card (or the highest trump card matching the fame card, if any) winning the round. The winning participating player gets the fame card and a cube matching the card he or she played, if any. The losing participating players get a cube matching their own card, plus a cube matching the card of the player on their left, if any. Then, any players who passed get to make a choice. Each passing player may take a cube of their choice from the bank, or they may steal an unprotected card that was just played by a participating player. (Note that each player gets the ability to protect only one card they play in the game, as they play it.) If a passing player steals a card, it goes into her stable of proteges to be scored at the end of the game. Any participating players whose card was not stolen by a passing player gets to keep their card as a protege as well. Then a new fame card is flipped over and the next round begins. Passing is a super important aspect of the strategy in Patronize. Because of the way the fame deck has two more cards than the players’ hands, each player is going to have to pass at least twice during the game (they can pass more, but it is probably not wise). Deciding when to pass is key to giving yourself the best chance to win the game. Yeah, you don’t get the fame card for that round, but maybe you steal a card that will fit your scoring plan for the end of the game. 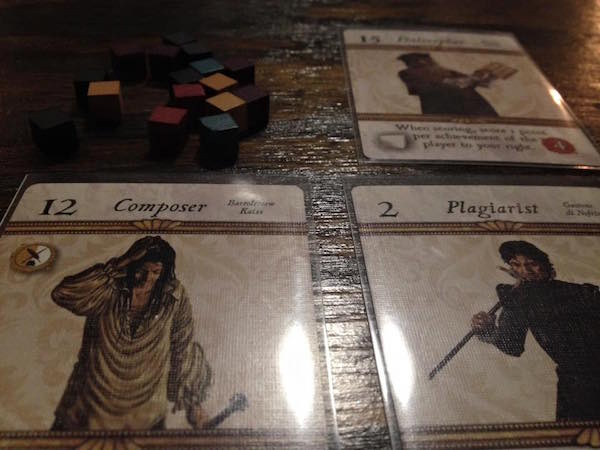 I love the way there is far more strategy than meets they eye in Patronize. First, you have to manage your hand. As in many card games, you have to make sure that you don’t play a high numbered card that is likely to get trumped by a lesser card. Plus, you want to play the least enticing card if there are any passing players, because you don’t want to get it stolen (which WILL happen). You also have to keep an eye on the scoring mechanisms of the proteges you have banked. There are some good victory point opportunities if you have the right combination of cards and cubes in your stash. Additionally, you have to pay attention to what your opponents are amassing, because you may want to make sure they don’t corner the market on certain colored cubes that will give them bonuses at the end. Suffice it to say, I found that there were far more choices to make than the size of this game would suggest. Patronize’s quick playing time makes it likely that you will want to string several games in a row. 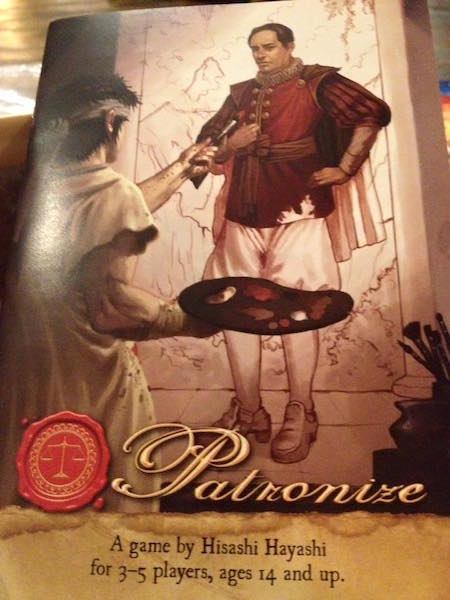 In conclusion, I am so glad that I finally discovered Patronize. It is a second-tier of complexity above a gateway game like Love Letter, and would make a perfect game to break out immediately after introducing someone to the world of modern day table top gaming. It also makes a great pub game or quick, but robust, filler for any gaming group. Check it out!

Thanks for reading, and nerd on!