Home » The Daily Bugle » A SERIES OF UNFORTUNATE EVENTS Recap: S01E01 The Bad Beginning: Part One

A SERIES OF UNFORTUNATE EVENTS Recap: S01E01 The Bad Beginning: Part One 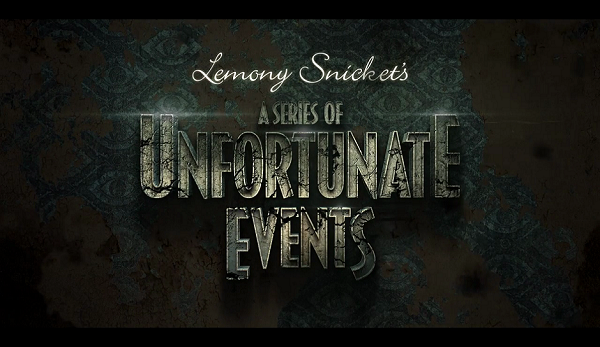 Sweet Christmas, the day has finally arrived! A Series of Unfortunate Events has made its much anticipated Netflix debut (and on Friday the 13th, no less). The eight episode series based on Lemony Snicket’s books of the same name had a trailer that unveiled a promising, thrilling interpretation. So without further adieu, I give you episode one.

DISCLAIMER: Please proceed with caution, as this recap will be riddled with spoilers. Literally. Every sentence will contain a piece of information that, if one is unfamiliar with the episode being discussed, could, well…spoil it for you.

We open with a rousing theme song sung by none other than the Count himself, Neil Patrick Harris. Seriously, is there anything this guy can’t do? Side note, who else thought of Dr. Horrible while he was singing? Episode titles roll like a silent film from the ’20’s, and I’m already here for it. “If you were interested in stories with happy endings, then you would be better off somewhere else,” warns Lemony Snicket (Patrick Warburton), who provides intermittent narration throughout the episode. He elaborates on the bleakness of this story and how depressing it is. He introduces us to the Baudelaire children – Violet (Malina Weissman), the eldest who has a knack for creating unique inventions. Klaus (Louis Hynes), the middle child who, like Violet, is incredibly intelligent. Last but not least is little Sunny (Tara Strong) – the baby with brag-worthy chewing skills. 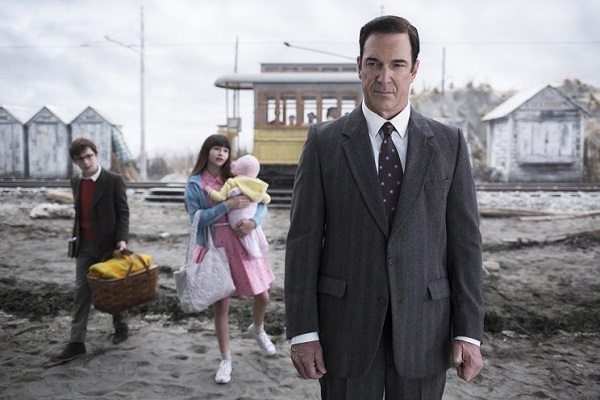 We see the children heading to the beach by train on a rather dreary day (Lemony explains they enjoy going on dreary days because of the lack of people). We also break into a montage of the Baudelaire children’s genius at work: Klaus and Violet asking each other questions about French translations and the position of air currents. Sunny deftly chewing on a jagged rock to smooth its edges so Violet can skip it over the water. To be honest, this skill seems more useful than knowledge of the position of air currents.

While the children are enjoying their day, Lemony advises the audience to leave on a “happy note.” Well, fortunately I was never good at listening to advice of any kind. A stranger appears on the beach, one by the name of Mr. Poe (K. Todd Freeman). He informs the children that their parents died in a tragic fire at their mansion. Poe then takes them to the smoky remains of their home. Mr. Poe is the executor of the Baudelaire’s estate, which also happens to boast an enormous fortune that Violet will inherit when she comes of age. He is tasked with the job of finding the children a designated guardian.

“Say goodbye, Baudelaires,” Mr. Poe instructs as they leave the ruined mansion to go stay with his family. The children are, of course, treated poorly. Most of the adults we’ve encountered thus far tend to look down on our little protagonists. Poe’s wife, who works for a newspaper, is seemingly obsessed with anything that is “front page news” like the Baudelaire story. She claims that “some people wait a lifetime for that!”

After an uncomfortable night with all three of the children squeezed on one cot, Mr. Poe takes them to their new designated guardian, Count Olaf (Neil Patrick Harris). He is a distant relative of theirs. Poe attempts to sing his praises, saying “He’s an actor, so you know his feelings are genuine.” Another thing I’m loving about this show so far: the witty, tongue in cheek dialogue.

We also meet Justice Strauss (Joan Cusack), who lives across the street from Count Olaf. She appears to be the only relatively normal adult. She immediately takes a shine to the kids and hopes to see them again.

Olaf’s house not only has a Gothic feel in structure and color scheme, but it’s also falling apart (age will do that). Olaf lets the children in and introduces himself. “I am Count Olaf, renowned actor and your new guardian. You’re welcome.” The hair/makeup team on this show deserve pay bumps, because NPH looks almost unrecognizable. Poe reminds Olaf that every cent of the Baudelaire inheritance is locked up till Violet comes of age.  Their parents also left specific instructions in their will regarding the raising of their children “should an unfortunate event occur.” Olaf shoos away Poe by saying “As we say in the theater, ‘exit stage right'”(I LOVE NPH). 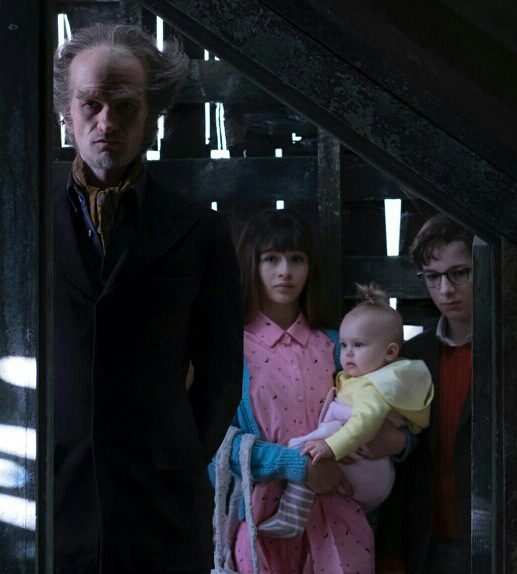 The house looks even worse on the inside. Trash heaped in every available space, dirty dishes, messy rooms. There’s a rodent infestation like nothing any large metropolitan area has ever seen (even Los Angeles!). Olaf gives the children a list of chores to perform while he gives them the grand tour of their new home. The kids get to sleep in the attic, on yet another small cot. “Out of all the enormous bedrooms in this mansion, I chose this one for your safety and comfort,” Olaf declares.

The kids get started on their chores. Justice Strauss knocks on the door and gives Olaf dinner she made so the children could have a home cooked meal. Olaf accepts the dinner, but like a true villain in any series regarding children, he eats it for himself.  He prevents Justice Strauss from seeing them.

After the children have crossed all their chores off the list, Olaf assigns them the task of dinner – they must cook for him and his theater troupe. Since they know next to nothing in regards to the culinary arts, they visit Justice Strauss and ask her if she has cookbooks in her library for them to peruse. They all bond over their love of books and their awe of Strauss’ expansive library. She takes them to the market to purchase the ingredients for dinner. Strauss confesses that while she has no children of her own (unless book babies count, which THEY DO), she would love to help care for them. Joan Cusack is wonderfully heartfelt and normal. Yay, Joan!

DANCE NUMBER TIME! The Baudelaire kids arrive to find Olaf and co, performing an homage to the Count himself – a true song and dance number. To heal the damage caused by such a raucous number, our heroes get to cookin’.

“Better than nothing,” Klaus says to Violet, as the two decide to keep positive about the situation. Perhaps they could make a life there. They serve their finished product to Olaf and the troupe, who immediately launches into a tirade about wanting roast beef. Klaus says he did not tell them this. Olaf slaps him hard in the face and subtly threatens to drop baby Sunny when he lifts her. He then demands the kids clean everything while they go to rehearsal.

We see Justice Strauss reading a book on adoption law. Maybe she will adopt the children (please, Joan Cusack, please!). One can only hope.

“I’m worried about the children. We need to get to them,” a woman who is handcuffed says to a man, who is also handcuffed. They are locked in the back of a car that’s driving sedately through the forest. They are the Baudelaire parents! They’re alive, guys! Woo hoo (pumps fist)! This is the final moment of the episode, as it should be.

I love the Wes Anderson feel of the show – the humor, dialogue, costumes and cinematography. Even the score screams of Anderson in the best way possible (think Grand Budapest Hotel). It’s incredibly fun, doesn’t take itself too seriously and boasts very comical dialogue. NPH shines in this and he seems to be having a blast, which in turn positively affects my mood when watching it. I’m also having a blast.

A Series of Unfortunate Events Season 1 is now available for streaming on Netflix.