While I enjoy learning about history – along with its wars, I have never been a war gamer. I think that is because any time I’ve been pulled in by a war game’s theme and concepts, its implementation has turned out to be fiddly and more trouble than it’s worth, at least for me. I admire the grognards out there that love arguing about line of sight and enjoy deploying stacks of counters, but those things just never turn me on in practice. Then I discovered Academy Games’ Birth of America series (1812: The Invasion of Canada, 1775: Rebellion and 1754: Conquest). All three games are designed by Beau Beckett and Jeph Stahl. I played 1775, and the rest, as they say, was history. Over the last six months I’ve played and enjoyed these games several times. 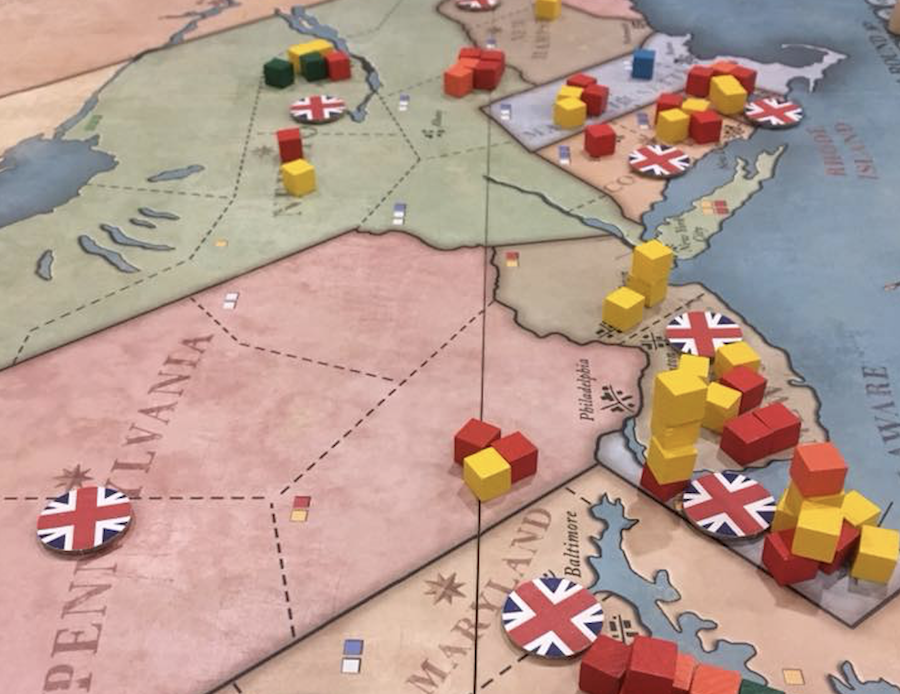 It should be no surprise, then, that Academy Games has shot to the top of my list of favorite game publishers. Academy’s attention to detail is obvious as soon as you open one of their boxes. The components are top notch (they even include little boxes to store components) and the rule books are superbly written and easy to follow. But where Academy (and its designers) shines brightest is in the game system implemented in these games. You see, instead of consulting numerous charts and graphs to determine die roll results, players use custom six-sided dice for each troop type in the game, representing the probabilities of hitting, fleeing, or making a command decision. A hit causes one opposing unit to be removed. A flee result causes the rolling unit to be removed from the board to be re-deployed during the player’s next turn. And a command decision allows the unit to stay put for the next round of battle or to calmly retreat to an adjacent territory. That’s it.

Turns are just as easy. Each player has a deck of cards which has a number of movement cards and event cards. Players always have three cards in hand at the start of their turn. A player has to play one (and only one) movement card each turn and MAY play any event cards that apply if she chooses. Each movement card states a number of armies and a number of spaces each army may move. The rules for movement are simple and well demonstrated in the examples in the rule book. The event cards add rule breaking moments which are based on history and can swing the tide of the war without unbalancing the fairness of the game. A game ends if, after a number of rounds, both armies of the same side have each played their lone treaty card. At that point, whichever side controls the most target territories wins. 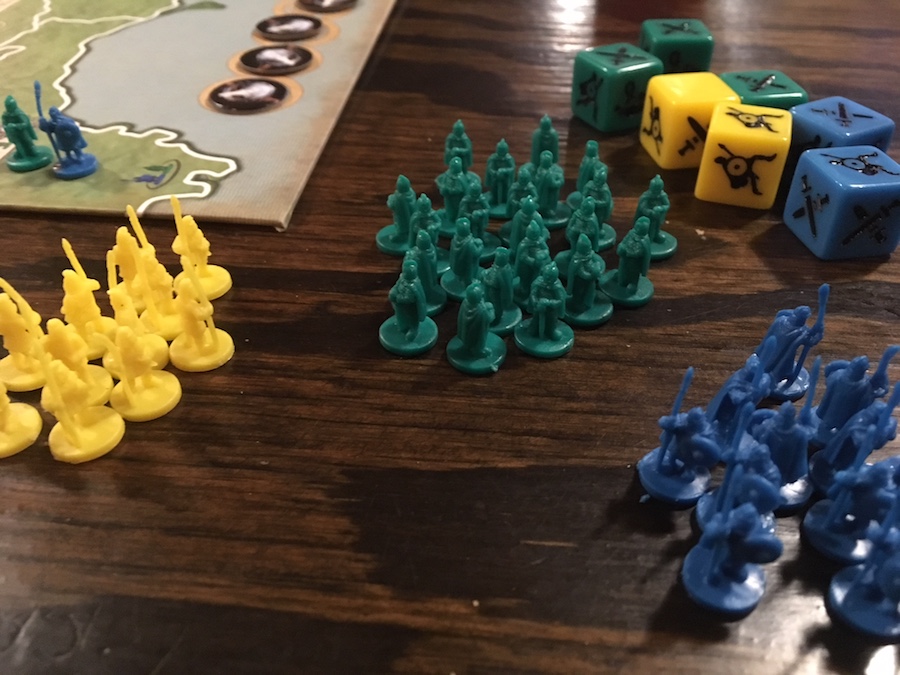 The above two paragraphs give a generic overview of the game system. And you should definitely check out all three games in the Birth of America series. But what about 878 Vikings: Invasions of England? I’ll let the rule book give us an overview:

Players on each side work together in order to coordinate their strategies. Each side attempts to control City Shires on the map to win. The English begin the game controlling all of England but a Viking Leader will invade from the sea almost every Round. The English players raise reinforcements from cities they control, while the Vikings must wait for a new invasion for reinforcements. The game ends when the Treaty of Wedmore is called; the side controlling the most cities at the end wins the game. 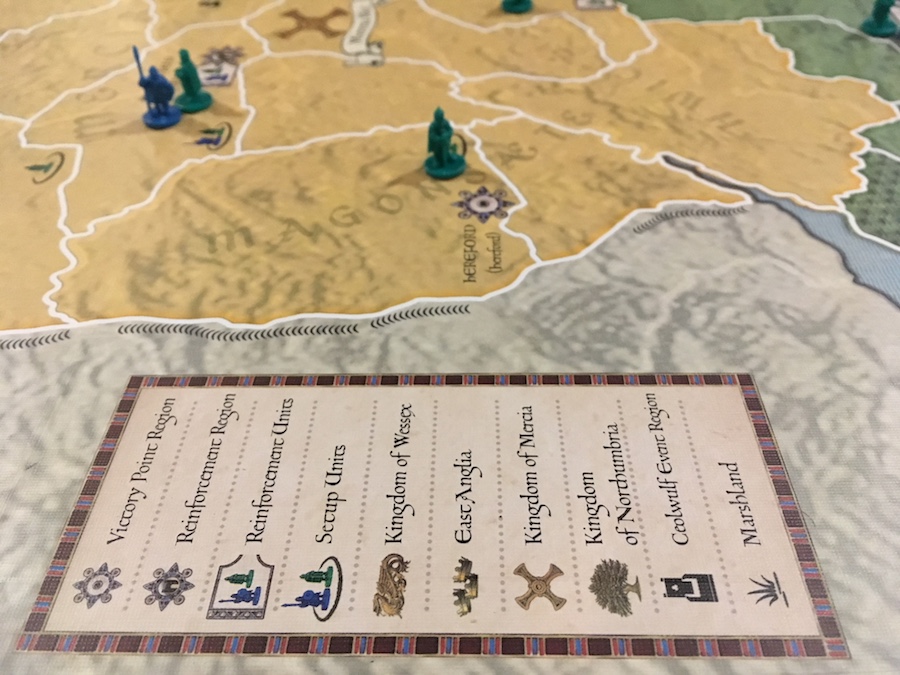 878 Vikings was also designed by Beckett and Stahl, but for this game they were joined by Dave Kimmel. Vikings is the first and (so far) only installment of the Birth of Europe series. Vikings takes the same game system from the Birth of America series and makes a few tweaks, which creates a fresh yet similar experience. In my first play, I took both English factions and squared off against the Vikings. 878 Vikings can be played by up to four players, but it also works well with two, as each player plays both armies of their faction. 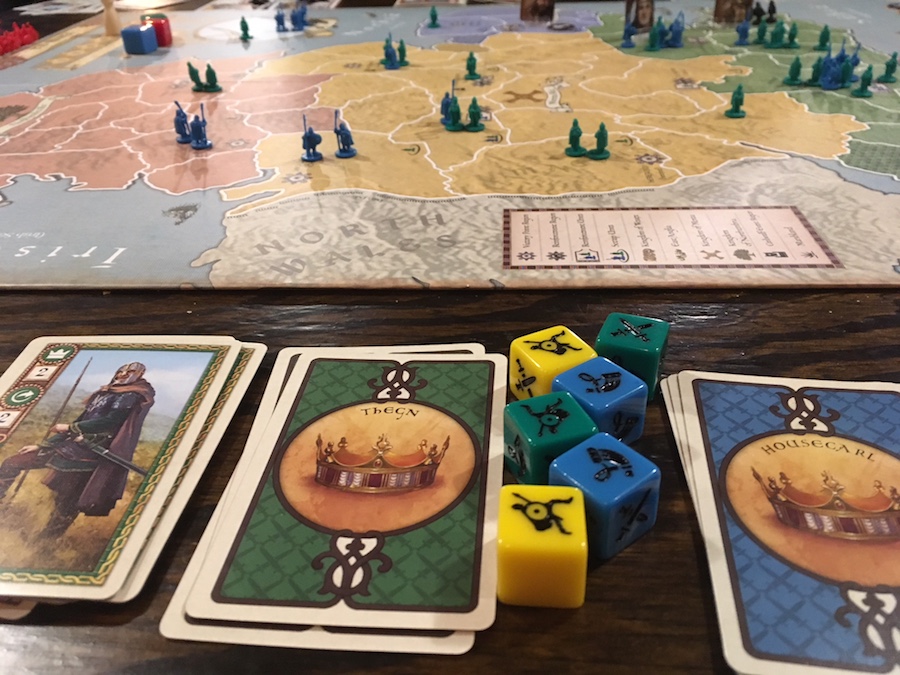 The early game is not pleasant for the English player, as hordes of Vikings land on the North Sea coast and cut down the English with sheer numbers. I have to admit I was whining during the first couple of rounds – rolling terribly and generally putting up little resistance. I kind of felt like Rocky getting pummeled by Ivan Drago. As the game went on, however, I began to see the design choices translate to meaningful in-game choices for the players. My opponent was forced to choose between continuing his blitz or slowing down to wait for more Vikings to land. The former could leave you exposed to counterattacks, but the latter can allow the English to catch their breath and reinforce, especially when Alfred The Great appears in round five with several units. 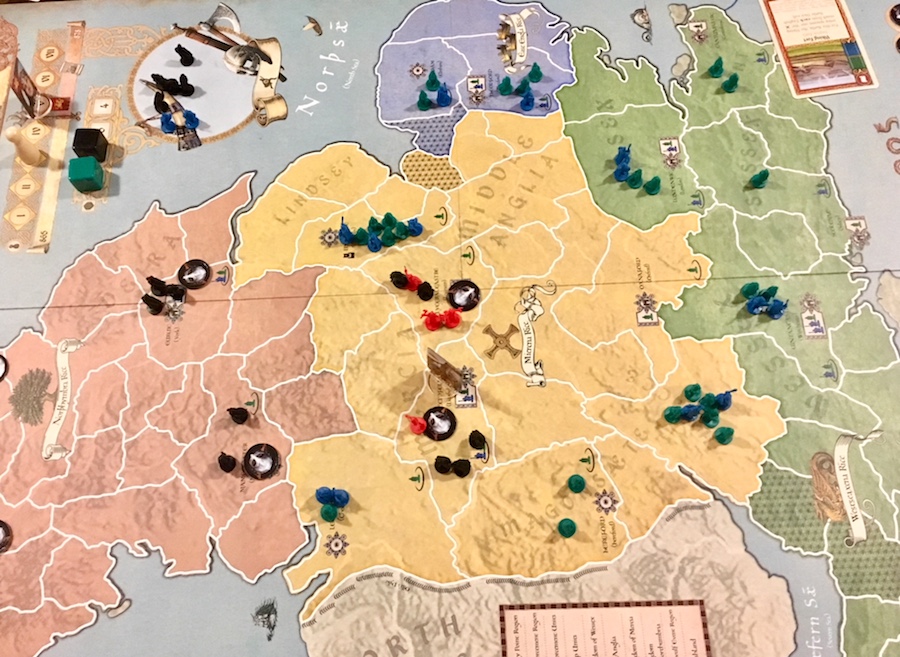 The English player also has some choices. When a city gets attacked, citizens are conscripted and random units jump into the fray (2-5 depending on the card drawn). While these “soldiers” are weak and flee often, they provide excellent fodder for the Viking hits and can slow the Viking advance. But while defending gives the English this boost, there are still moments where it may be advantageous to attack a city location in order to regain its control if there are only one or two Viking units left behind to hold it. All of the previous games have a bit of a tug of war in this regard, but none stretch it like 878 Vikings. It was not until the 3rd round of the game when I FINALLY won a key battle. But win it I did, and the Viking ranks were left thin and vulnerable, with Alfred’s appearance looming. You could feel the tide turning, and it was exciting (at least for me).

As for differences between 878 Vikings and the Birth of America series, aesthetically, instead of wooden cubes, units are small plastic miniatures with a decent amount of detail. Rules wise, there are a few cool tweaks. The large one has to do with leaders, which are represented by a single standee on the map, but have a corresponding card on which their units are placed. Leaders can move and fight, and can also pick up or drop off units as they go. Once the last unit is removed from the leader’s card, the leader is defeated and removed from the game for good. Some event cards can be played during another player’s turn, which is a change from previous games. The end game conditions can also be a little different with the game lasting at most seven rounds as opposed to eight in the America series. Additionally, a game can end in any round in which the Viking player controls 14 or more cities (Viking victory) or zero cities (English victory). 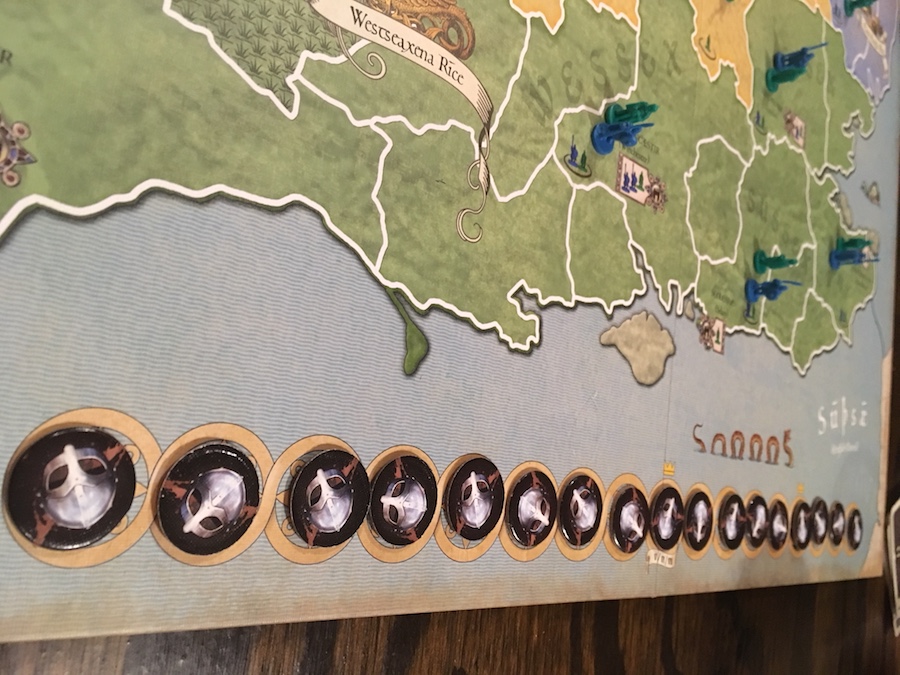 As in the Birth of America series, Academy has hit a home run with 878 Vikings: Invasions of England. If you haven’t tried a war game because it seems too complicated or tedious, then you should consider giving this a try. And if you’re a gamer who loves strategy but hates minutiae and fiddliness, then you probably should buy it now. I can’t wait to play it again.

Thanks for reading. Keep nerding on.