Home » TV & Streaming » The 7 Funniest Moments on THE WALKING DEAD

The 7 Funniest Moments on THE WALKING DEAD

The Walking Dead has given fans some of the most heartbreaking, scariest, and intense moments on television. But it’s not all doom and gloom.  There are some fun moments too.  It comes with being a part of the TWD Family!

As a fan I enjoy seeing the fun moments in the story that have made me laugh and the stories from behind the scenes that make me wish I was a part of the crew.  It just shows that with such serious content, the people who make the show need to have an outlet.  Here are the seven funniest moments on The Walking Dead.

RELATED: 7 OMG! Moments from Each Season of THE WALKING DEAD 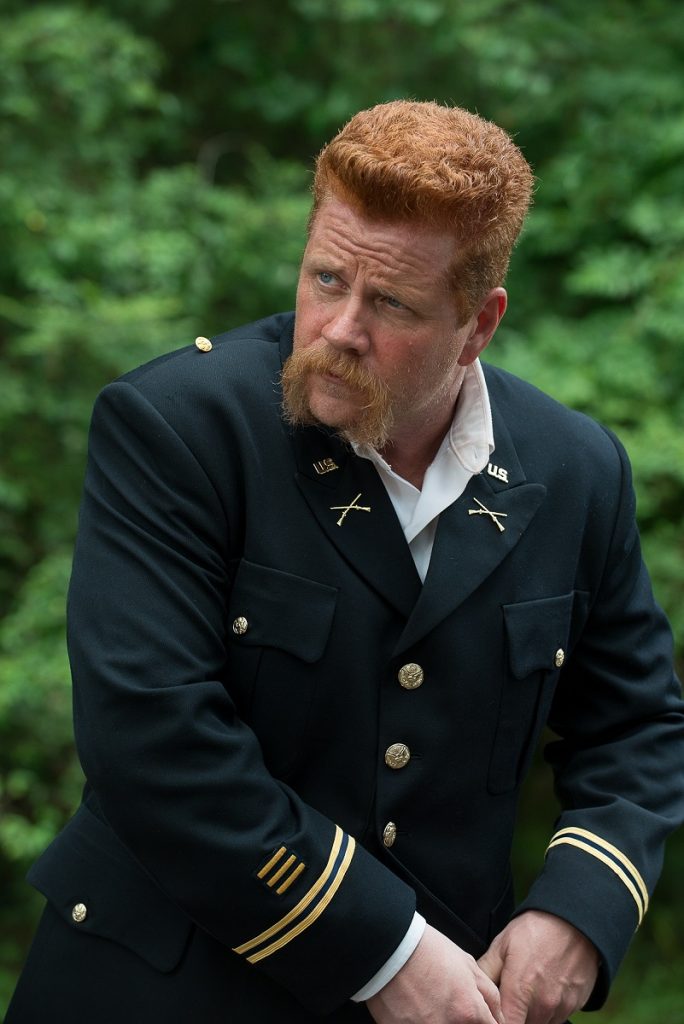 There’s always that one friend who has something unique to say in any given situation.  Most of the time it’s funny and inappropriate.  That person on TWD was Abraham Ford (Michael Cudlitz). Even in the most tense situations, Abraham had something clever to say…or something that made you say..’Huh?’

“I’ll let you shave me down, dolphin smooth.” – Abraham’s answer to Rosita (Christian Serratos) saying he needed a haircut.

“Who’s Deanna?” – This probably shouldn’t have been funny, but it was. This happened when the group met Aaron and the Alexandrians.  Deanna (Tovah Feldshuh) was their leader…so she was kind of a big deal.

“Mother dick!” – What else is there to say when a bunch of walkers show up at your work site?

“Were you trying to make pancakes when you were pouring the Bisquick?”  – This was Abraham’s way of asking Glenn (Steven Yeun) and Maggie (Lauren Cohan) if they were trying to get pregnant.  Cudlitz took this line and used it to collect food.  He hosts a food drive at Walker Stalker Cons and people bring a lot of Bisquick.

Fans have gone crazy for Abraham’s quotes on the show.  There are even t-shirts.  It’s really too bad Negan (Jeffrey Dean Morgan) had to kill Abraham.  He was a fun guy to watch. 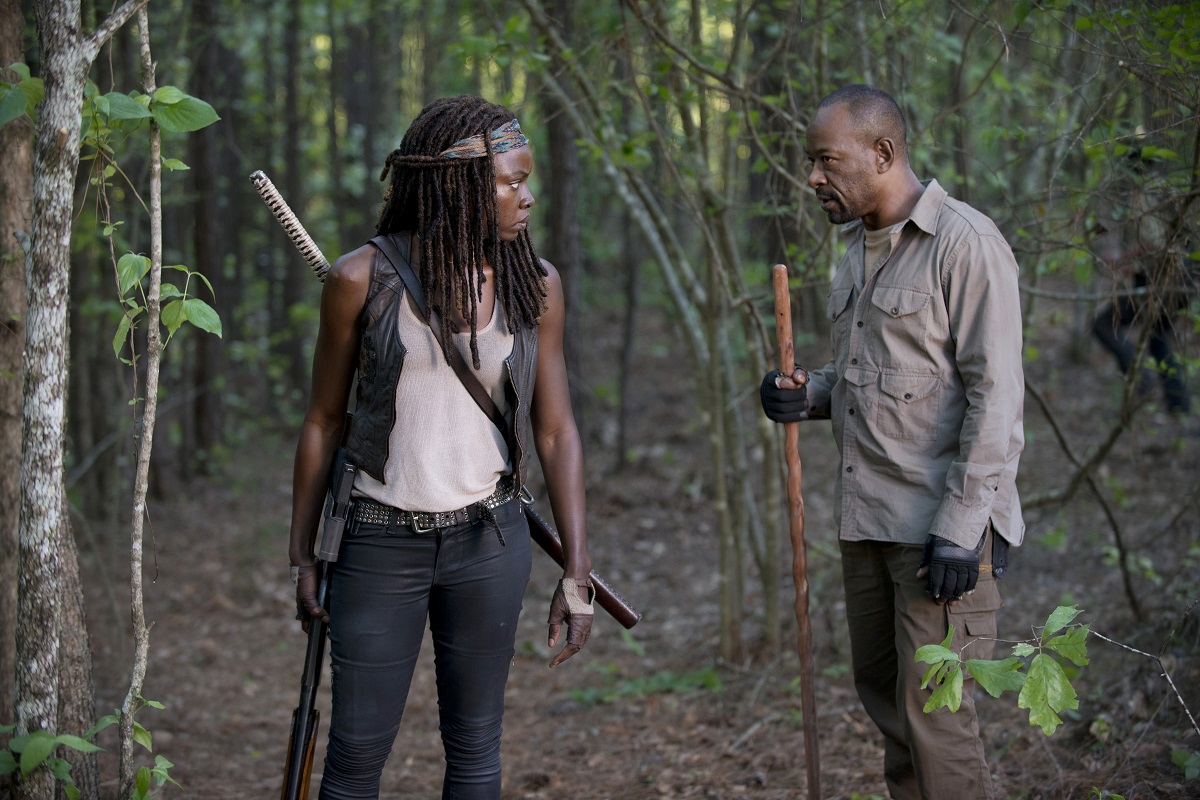 In season 6, Morgan (Lennie James) re-emerged in the TWD world, showing up at Alexandria with Daryl (Norman Reedus) and Aaron (Ross Marquand).  He worked some things out with Rick (Andrew Lincoln), but had only one question for Michonne (Danai Gurira).  Did Michonne eat his peanut butter protein bar?  Michonne denies it, but…she did.

In season 3, Rick, Michonne, and Carl (Chandler Riggs) went back to Rick’s hometown looking for guns. They found the guns in Morgan’s hideout. They also found food.  While Rick waited for Morgan to wake up, Michonne helped herself to a protein bar.  The mat said “Welcome” was her excuse.

At the end of season 6, Rick comes clean and tells Morgan that Michonne did take his last peanut butter protein bar. 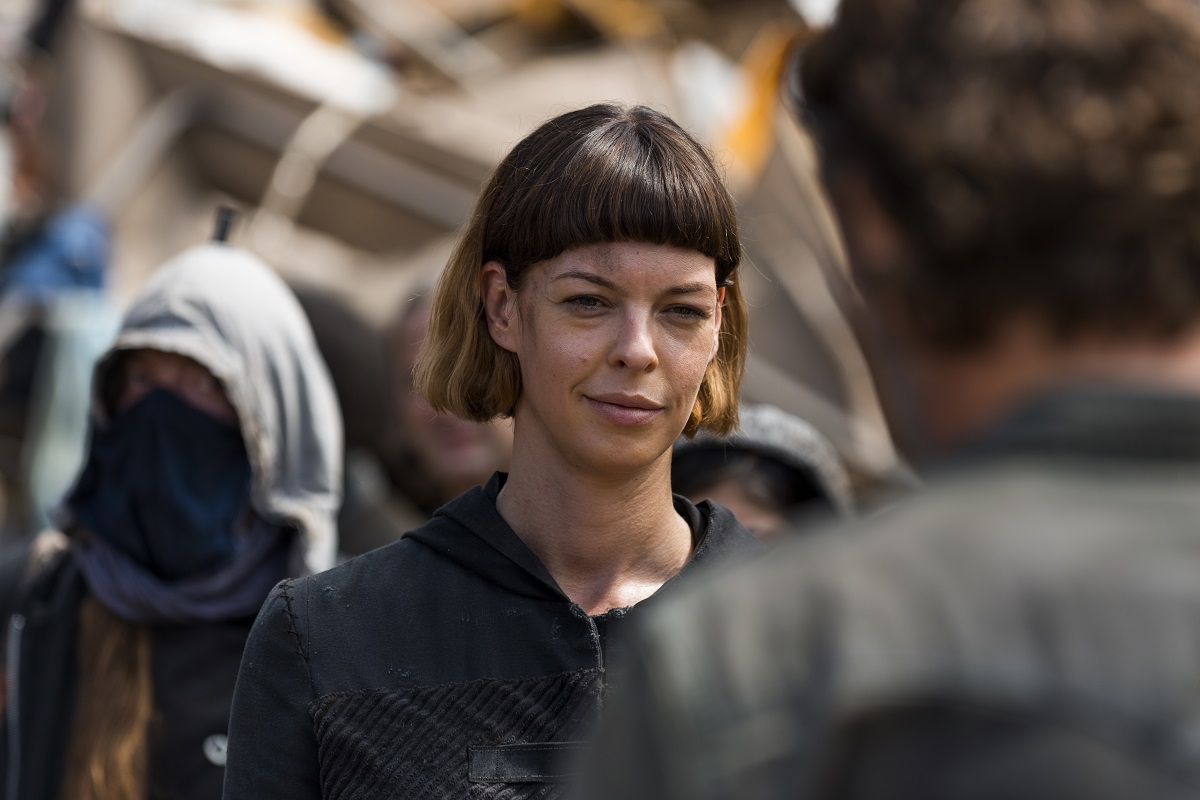 Michonne and Rick weren’t a couple for very long when they met Jadis (Pollyanna McIntosh).  Jadis is the leader of the Scavengers. The Scavengers are really strange. They talk in broken sentences, live in a junkyard, dress all in black.  They look like some kind of cult or something.

When Rick’s gang met the Scavengers, they had no idea what to expect. Rick tried talking to about joining their fight against the Saviors.  Jadis threw Rick in a pit with an altered walker, something like you’d see in a Mad Max movie.  After Rick survived the pit, Jadis agreed to join them.

On the day they were supposed to meet the Saviors, Jadis was impressed with Alexandria.  Jadis asked Michonne if Rick was hers. Michonne said they are together.  Jadis then said she will lay with him after. And asked if Michonne cared. LOL!!!!!

Rick gives them both a funny look before Michonne replies, obviously bothered by the proposition, that they should get back to work.  Rick quickly agrees and backs away from Jadis. 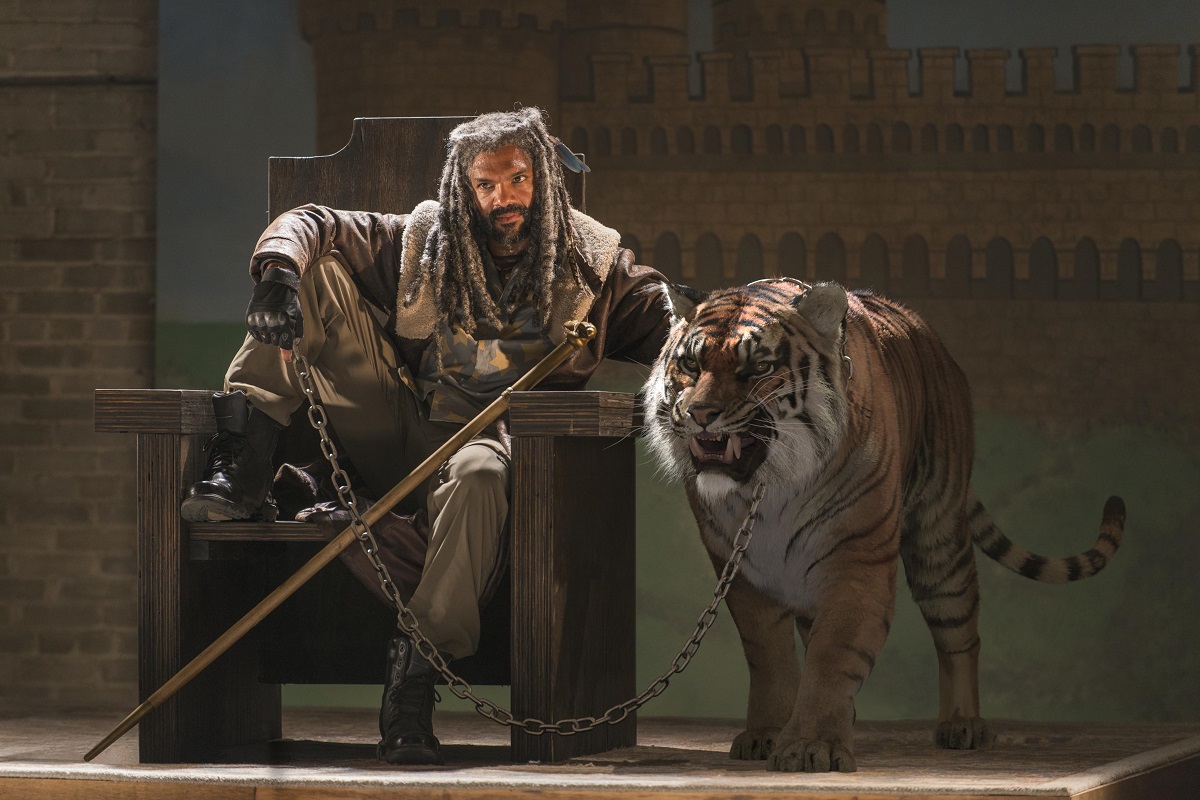 Up until Season 7, the world was pretty bleak. Everyone is sweaty and dirty most of the time.  There are a lot of places with no electricity or running water.  People are literally living in the dark ages.  So why not dress and act the part.  The Kingdom was once a school.  It has a nice courtyard, auditorium, and a lot of happy people. Ezekiel (Khary Peyton), and his men speak as if they are acting out a Shakespearean play. Well…it’s just the King and Jerry (Cooper Andrews) really.

Morgan was the first to meet a knight of the Kingdom. The knight saved Carol (Melissa McBride) and Morgan from a rogue savior with a gun.  Morgan took Carol to get help. She had been shot by the savior. They were both there for a little while.

Carol has a knack for acting feeble when meeting strangers for the first time.  She did so when she met King Ezekiel.  However, she was really not expecting what she found.  Carol gives them the strangest look when she gets to the auditorium.  Morgan apologizes for forgetting to tell her that Ezekiel has a tiger.

Ezekiel literally sits on a throne.  The tiger’s name is Shiva, she sits to his left. On his right is Jerry.   BTW, Jerry is the best thing to happen to TWD in a long time.  He takes his role seriously and doesn’t break character. And he smiles a lot!  It’s always nice to see a smiling person on TWD.

Ezekiel, in his thespian way, asks Carol why she’s silent.  Carol’s reaction is “I don’t know what the hell’s going on in the most wonderful way.” She is clearly amused and plays along.  Later Ezekiel explains how he became the king and why they act the way they do.  It keeps his people happy and they don’t think about the outside world.  He just want to keep them safe and happy.

That was a great moment! Totally unexpected and makes you smile…and brings us to our next funny moment… 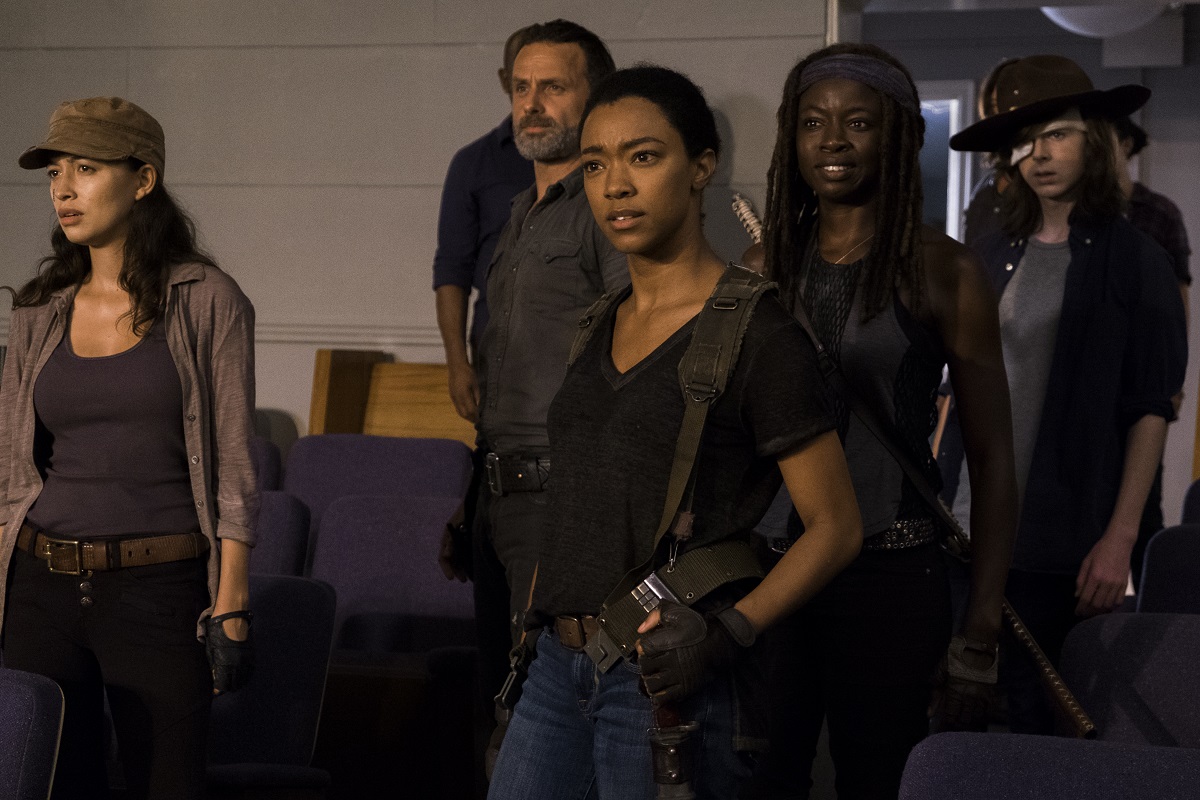 In the middle of season 7, Rick decided he had enough of Negan. He rallied Alexandria and Hilltop to stand up against the Saviors.  Jesus (Tom Payne) told him, it’s time to meet King Ezekiel.

Jesus took Rick and others to the Kingdom. They were met by men wearing armor…first strange look.  The guards took them inside the walls and they find Morgan.  What a great surprise!

They are led into the auditorium to meet the King. Ezekiel happily greets Jesus.  Jesus calls him ‘your majesty’ and starts to introduce Rick…oh wait! He forgot to mention the tiger.  Rick and his whole group are a little freaked out by Shiva.

The way Rick says “kang” Ezekiel is so funny.  His strong…but fake…southern accent…it sounds so forced.  You just have to listen to it.

This relationship is going to be interesting in Season 8.  I’m not sure if Rick can get used to talking to Ezekiel. 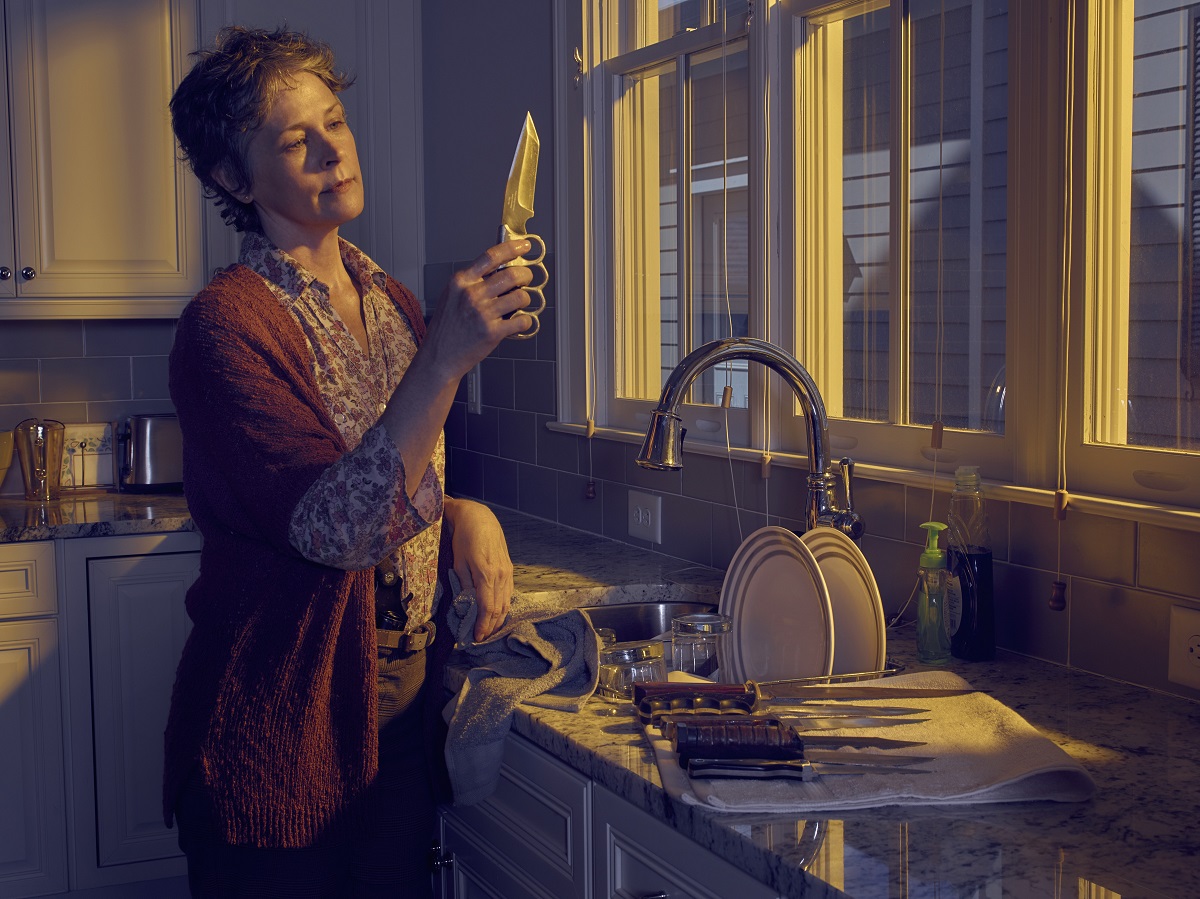 Speaking of Carol, she has changed a lot over the seasons. She truly is a chameleon, able to adapt to any situation and play the part that is most needed.  When the group arrived in Alexandria, Carol turned into Suzy Homemaker.  She told them she gardened, arranged flowers, make sure dinner was ready for husband…she’s like the den mother of the group with nothing to contribute.

When Deanna asks where she fits in the community, Carol says she likes to be involved in the community…like a junior league.  She goes on to bake cookies and casseroles for everyone and always delivers with a smile.  It’s like, she became the housewife she always wanted to be.

Behind closed doors, Carol is just as hard as Rick and Daryl. She wanted Rick to take over the community.  Carol helped save the community from the wolves and never missed the timer on her cassarole.

Oh Carol…in the words of Daryl Dixon, “You look Ridiculous!” 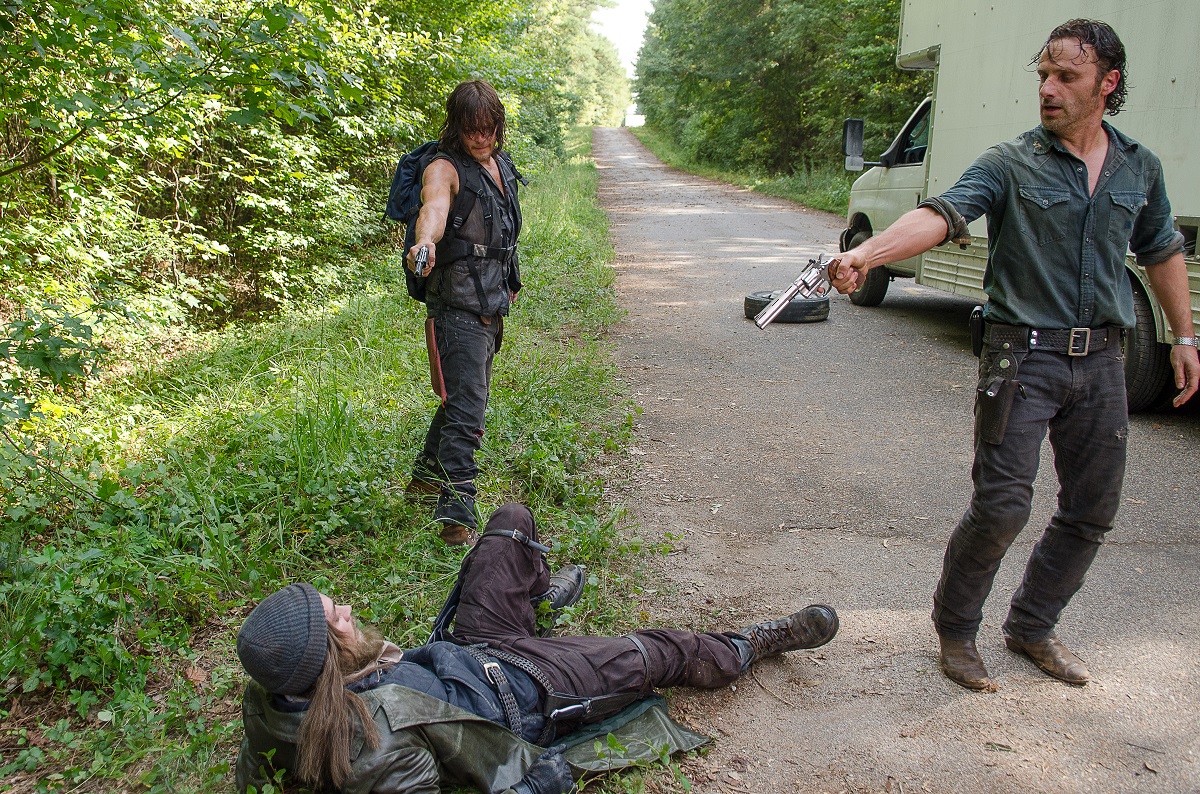 Rick and Daryl were on a supply run, listening to Rick’s awful taste in music when they met Jesus. They found a truck that was well stocked with supplies.  And Jesus found it at the same time.  What happened next was a short battle for the goods in the truck.

Rick and Daryl were able to get the truck and started to drive it back to Alexandria.  They heard something on the roof of the truck and stopped. Jesus flew off the top of the truck.  And the chase began. A fan added the Benny Hill music to the chase scene that gave it a much needed comic turn. The following video was posted by YouTuber Peter Moreau. It makes this scene the funniest moment on the Walking Dead.  I can’t describe it.  You just have to see it for yourself.

What are some of your favorite moments of The Walking Dead? Season 8 will be filled with more intense, scary and heartbreaking moments.  I just hope there’s some room for humor during a war.  The Walking Dead premieres Sunday October 22 on AMC.