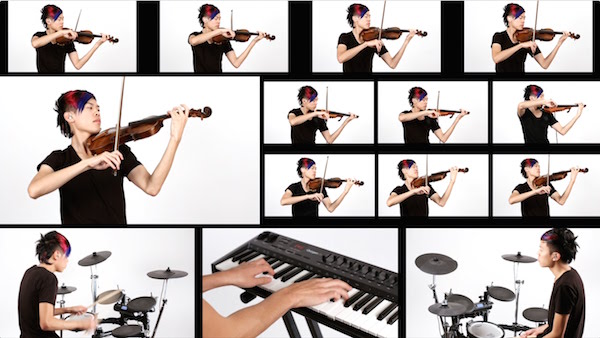 As little as fifteen years ago, music fans were limited when choosing what to listen to. Even now, radio stations follow rigid playlists, local musicians fight for stage time, and record stores can only hold so many albums. Then YouTube came along, and suddenly anyone with a microphone and a webcam could post music for massive audiences, filling every possible niche. The Top 40 market still exists, mostly through VEVO music video channels, but indie artists have been able to record and release breakout hits in ways that never would have worked back when they had to go through record labels. Since then, violinist Lindsey Stirling sold out the Hard Rock at Universal Studios in Orlando. Starkid has performed for screaming, packed crowds at conventions. Miranda Sings has her own Netflix series. All of these artists owe their success to the perfect democracy of YouTube fame. Yet even among the breakout YouTube stars, there are scores of musicians on there that deserve much more attention than they’ve been given so far. Below are five of the most underrated musicians hiding on YouTube.

5. Jason Yang
Once upon a time, violin was just a classical instrument. Over the past decade, artists like Lindsey Stirling have taken violin out of the classical music sphere and turned violin into the new guitar. Soon enough, every frat party will have a stoner pulling a Stradivarius for a sing along around three AM, but for now, most violinists are still classically trained. Twenty-eight year old Jason Yang is no exception, having studied violin in school and privately since childhood. While he has since taken his multi-colored, spiky hair on tour with Madonna, Yang did get his start on YouTube, with his take on the Game of Thrones theme netting over nine million views to date. What deserves more views, however, is his piece, “The Dark Game of Hobbit Knight Thrones,” a stunning medley of themes from The Dark Knight, The Hobbit, and Game of Thrones. Watch it here.

4. Smooth Mcgroove
Smooth Mcgroove is proof that you can’t judge an album by its neckbeard. If you look at the thumbnail of a Smooth Mcgroove video, you won’t doubt for a second that he’s a gamer. What you won’t expect, however, is his pitch perfect a cappella renditions of memorable video game themes. The classic themes from Legend of Zelda and various Sonic and Mario games are all there, plus a slew of covers of songs from the Undertale soundtrack and the battle theme from Pokemon Go, and listening to them, you can see why he calls himself “smooth.” After all, his falsetto is smoother than many sopranos’ high notes, and his harmonies are crisp and clearer than the best Backstreet Boys’ tunes. Listen long enough, and you’ll forget you aren’t actually listening to the original game soundtracks. Plus, his videos usually have his black cat, Charl, who is worth a view on his own. Watch his cover of Undertale’s “Meglovania” here.

3. SharaX
Indie game Undertale has basically spawned its own genre of fan art, YouTube comment memes, and music. In addition to the aforementioned Smooth Mcgroove’s a cappella renditions, there are kazoo covers of the soundtrack, countless Undertale themed parodies of “Stronger Than You” from Steven Universe, and even an in-progress full musical adaptation by Man on the Internet Productions. One of the most prolific Undertale themed-music channels belongs to SharaX, whose electronica covers of Toby Fox’s original soundtrack have broken many a replay button. In addition to remixing such beloved tracks as “Heartache,” “Spider Dance,” and “Meglovania,” SharaX also has created several original tracks from the perspective of various characters from the game (most frequently Sans and Papyrus) as well as those of additional characters from her own expanded Undertale universe. SharaX rarely sings her own lyrics, so they’re perfect fodder for anyone looking for something to cover. Be forewarned, though—her tracks are much easier to listen to than to sing. See her original song “Tick Tock” here.

4. Chase Holfelder
Even people with the most basic understanding of music theory understand that major chords make a song happy or strong while minor chords make it melancholy and wistful. People have turned “Fur Elise” into a happy song before just by changing a few notes to put it into a major key. But Chase Holfelder has turned the minor key/major key change into an art form, covering classics like “Amazing Grace” as well as hits from the last thirty years, all with a slight tone shift that makes them just a bit “off.” And of course, he has the soulful tone and a face full of emotion to make his covers worth listening to even without the minor/major angle. See his minor key version of “Kiss The Girl” here.

5. Colleen Ballinger
Ok, so Colleen Ballinger is a little more well-known than most of the others on this list. And true, if we were discussing her alter ego, Miranda Sings, we could hardly put her on a list of “underrated” musicians. But I’m mentioning her here anyway because while Miranda Sings gets a lot of internet and real world attention, Colleen Ballinger doesn’t get nearly as much as an actual singer. It took some time for Colleen to even begin putting her own voice out there on her PsychoSoprano channel—in the early days, most people just thought Miranda Sings really was this tone-deaf wannabe with a love of smeared red lipstick. But even then, recordings of Colleen Ballinger in Songs for a New World quietly sat on YouTube, one of them garnering less than 500K views in nine years.

Now, the majority of her audience is in on the joke, but Colleen’s just become more talented in the interim. Listen to her cover “Love is an Open Door” with Miranda Sings here.