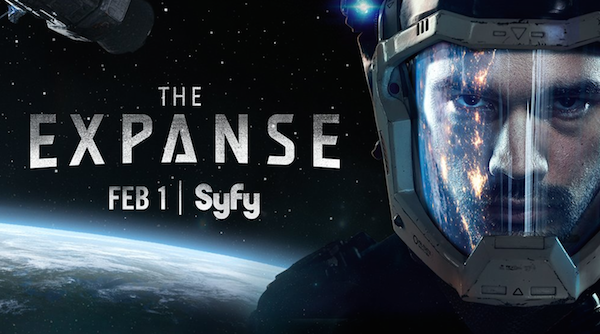 Even though it feels like in the time that SyFy has taken to bring us the second season of The Expanse, we probably could have colonized the goddamned solar system ourselves (I call Mars, btw!). The show finally returns on February 1st. SyFy has a fairly delightful (if not totally comprehensive) recap of season one that re-enacts the whole thing with cats.

But as adorbs as that is, we thought you might benefit from a little non-feline refresher as well. Now The Expanse is complicated. Very complicated. Like, Game of Thrones complicated. But we’ve boiled it down to six things we think you really need to know before the show burns back into your orbit.

1) The Players on The Board – Earthers, Martians, Belters (but also the OPA):

So you probably remember that the world of The Expanse takes place several hundred years in the future. Humans have pushed out into the solar system and colonized every dang rock they could manage to dig into. Aside from the Earth and Moon (or as they call it “Luna”), people have also colonized Mars and many, many asteroids and moons in the outer solar system, collectively called The Belt. Chief among these asteroids is Ceres. They also maintain lots of free floating space stations, the most important of which is Tycho Station.

Earth: Governed by the U.N., it’s rich and bountiful and pretty over-populated (hence the urge to get off the planet). It’s the home to many corporations who exploit the belt for resources. Martians and The Belters both think of Earth as a corrupt, bloated, gated community full of spoiled assholes. Earth thinks of the Martians as militaristic cowboys and The Belt as its floating empire and cash cow.

RELATED: 5 Reasons To Watch The Holy Effing Shit Out of THE EXPANSE

Mars: Once Earth’s greatest colony, Mars was able to gain its freedom and is now its greatest competitor (think England and the U.S. after the revolutionary war). Though technologically advanced and wealthy, Martians still think of themselves as the boot-strapping pioneers who threw off the yolk of servitude and are bonded by a generational project to terraform the red planet. Earth is their chief rival and they are in a mostly cold war with their old colonial masters for dominance of the Solar System. Earth thinks Martians are loud mouthed, militaristic cowboys (they even talk with a twang) and Belters think of Earth and Mars as being indistinguishably corrupt.

The Belt (and the OPA): Comprising everything that isn’t Earth/Luna and Mars, The Belt is a collection of colonized asteroids, planetoids, moons and free floating space stations. They are the colonies of Earth and Mars and those two inner planets run the belt through direct military control and sub-contracted corporate security firms like Star Helix Security on Ceres. Though there are hundreds of human colonies in the belt, the biggies are Ceres, Ganymede and Tycho Station. Generations of living in low gravity have physically altered Belters physiology, making them long, thin and tall.

It also means that, due to the higher gravity of Earth and Mars, Belters can’t set foot on those planets without risking death. So they’re stuck “on the float” or near to it and have been taking shit from “the inners” for centuries. The Belters are represented by the Outer Planetary Association or OPA. Part revolutionary government and part terrorist organization, the OPA fights for the rights of Belters and for their eventual freedom. Earth and Mars think of The Belt as their property and the humans living their as second class citizens. Belters think of Earth and Mars as the jackbooted assholes who have exploited them forever.

2) Our heroes, the crew of the Rocinante:

Every space opera needs its heroes, and James Holden and the crew of the former Martian fast attack ship, The Rocinante, are our huckleberries. Here’s the quick and dirty on the gang: 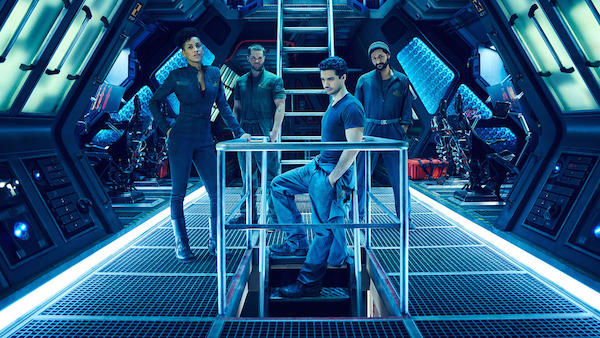 James Holden: An Earther and the only son of a family co-op of five Dads and three Moms in Montana (can you say, “sci-fi key party”), Holden started out as a fuck up. Drummed out of the U.N. Navy for misconduct (he was disgusted with Earth’s imperialism), he ended up the second in command of a shitty ice hauler called The Canterbury. When the Canterbury was destroyed, Holden took command of the surviving crew and naively helped start the coming war by broadcasting video of the ship’s destruction to the whole system. Last season, Holden seemed noble and kind, but was a pretty insecure commander of his rag tag crew. But by the time they’d escaped with the Roci, we saw that, among other things, Holden had a real hero hiding in that jumpsuit.

Naomi Nagata: A Belter, Naomi is Holden’s X.O. She’s a brilliant engineer with two degrees and is the heart and conscience of the crew. Last season she was a sober, wise counter-point to Holden’s (often) reckless naiveté and idealism. But in the final episode on Eros, Naomi surprised Amos and Alex with some suspiciously deep knowledge of the OPA. Where did she come by this know how? Is she OPA? There’s definitely more to come.

Amos Burton: An Earther, Amos is the engineer and chief muscle of the Roci. We don’t know much about Amos, but that’s because he’s the strong, brutally violent, quiet type. What we do know is that his background is rough and that he’s not afraid to pop a cap in a fool. He’s a wild card who everyone is a little afraid of, but he’s proved many times that his loyalty is to his crew (and not much else).

Alex Kamal: A Martian, Alex is the pilot of the Roci. He was once in the Martian Navy, but like Holden, washed out. Though (like many Martians) Alex is of Indian descent, he speaks with the Martian’s cowboy twang. But that’s about all the “cowboy” he’s got in him. A little self-serving and cowardly, Alex isn’t the bravest member of the crew, but he’s an incredible pilot who flew the Roci out of a lot of trouble last season.

Good Lord, there are a lot of characters in this show. But that’s what makes it feel like “GoT in Low Gravity” (I claim #GOTLG). Here are some quick blurbs about other characters you need to know: 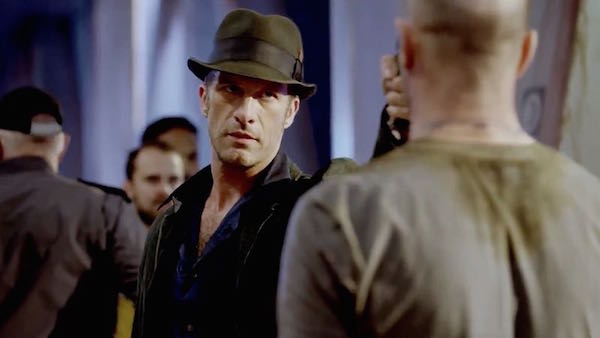 Jim Miller: A hard-boiled detective from Ceres working for Star Helix Security, Miller wears a fedora, likes to drink, has a nose for mystery and hair like the singer from Flock of Seagulls. Tasked with hunting down wayward rich girl, turned OPA terrorist, Julie Mao, he sort of fell in love with her (or at least videos of her). His heart was broken when he discovered Julie’s corpse on Eros Station, deformed by the alien Protomolecule. When we last left him he was seeing visions of Julie Mao. Was this the effects the massive radiation dose he got with Holden or is it something else?

Fred Johnson: Known by many as “The Butcher of Anderson Station”, Fred was once a U.N. colonel responsible for war crimes against the belt. But he switched sides and is now the head of Tycho Station and the unofficial leader of the OPA. After giving Holden and the crew safe harbor on Tycho, he sent them on a mission to Eros to find out what happened to Julie Mao. Then the Protomolecule, vomit zombies, radiation… yeah… it wasn’t great. He’s a hard man to trust, but he’s their only safe harbor in the dangerous sea of the Sol System. 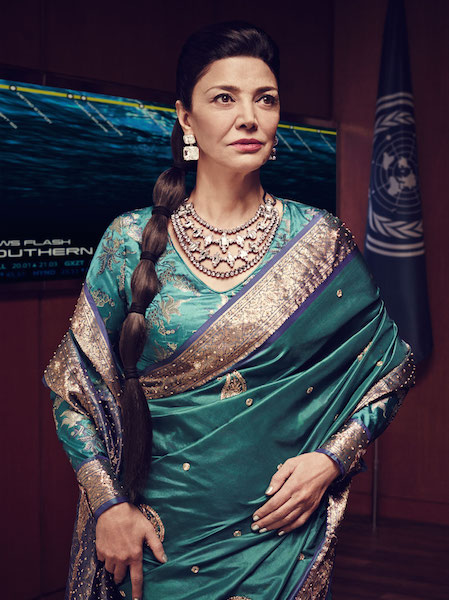 Chrisjen Avasarala: With a foul mouth, a rad sari and a vocal fry that would put any millennial to shame, she’s the under-secretary of the United Nations on Earth. Last season, she uncovered a plot involving the U.N. Secretary and corporate baddy and Julie Mao Daddy, Jules-Pierre Mao. Sadly, it wasn’t soon enough to stop the Protomolecule’s release on the hapless inhabitants of Eros Station. But don’t count her out, the war between the powers of the solar system is about to kick off and she’s a major player.

So along with all this internecine warfare, there’s some alien shit brewing too and it’s called the Protomolecule. Just as the White Walkers are to Game of Thrones, the Protomolecule is to the world of The Expanse. It’s the shared doom that the players don’t realize is the real threat (or savior?). An alien weapon discovered on one of Saturn’s moons, Phoebe, by Jules Pierre Mao’s Protogen company, it is a mysterious goo that turns people into mutant zombies before absorbing them into its hive mind. At the end of last season, the evil corporate scientists of Protogen tested the goo on the population of Eros, almost killing our heroes in the process. Why did they do this? What are they planning? How will this affect the simmering war between the powers of the solar system? Answers: We don’t know, we don’t know and we don’t know, but probably in a big way.

Readers of The Expanse novels know that we’re just getting started with this world. But the producers of the show have not been totally faithful to the novels, so there’s really no telling what’s in store. But in the interest of keeping things SPOILER FREE, we will limit our predictions to what’s been released in the trailers. 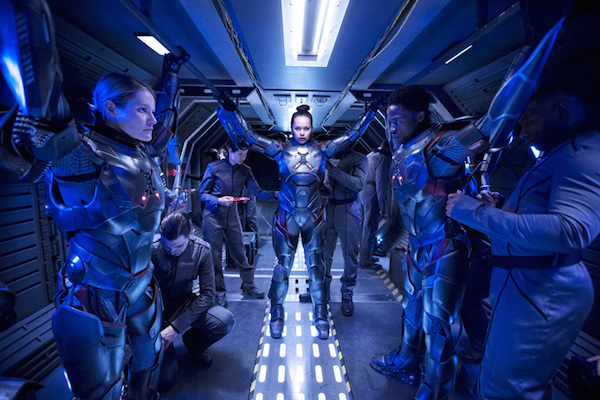 One thing is certain: we will meet Gunnery Sgt. Bobbie Draper of the Martian Marines. In the trailer she is in a heated battle on some planet or another, wearing her super rad powered armor (so cool). In the books she’s a major player, so no doubt she will make a big impact this season. In addition to Bobbie’s entrance, we can expect the crew of the Roci to become more gelled. Last season spent a lot of time showing the crew’s distrust of each other and their slow journey toward becoming a real team. But they’ve been through a lot together, so here’s hoping they do away with the nervousness and just let the crew be a tight unit. Finally, there are lots of battles scenes in the trailers as well as talk of “picking sides”, so there’s little doubt that we can expect the cold war between Mars, Earth and The OPA to turn hot. We’re hoping that means lots more space battles!

Okay, that’s all we got. But what do you think? Comment here or tweet me @BrianDBradley or @geekgirlauth with your thoughts and predictions!

Let’s flip and burn everybody!