With the ever-growing popularity of board games, it’s hard to keep up with all the new releases and Kickstarter backings that come along. Sometimes it seems like there has to be a lot more acquiring of games than playing of games going on. With so many options out there, there are bound to be some excellent games that go unnoticed and slip into oblivion. If you’re like me, sometimes you remember something you were abuzz about when you heard it was coming out a year ago, but totally got lost amidst all the other table top candy that emerged since then. There are a few games that I lost track of (or never heard of) that I have now obtained and am interested to play. 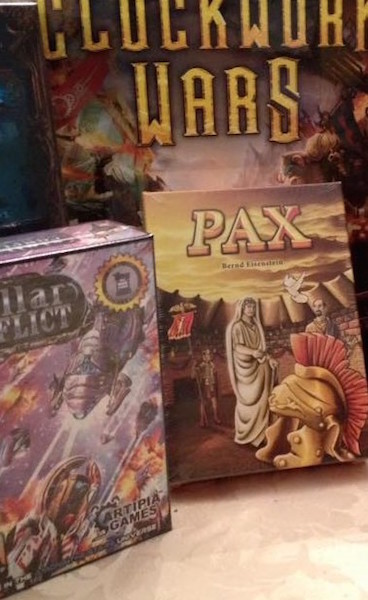 PAX came out back in 2011. It is a competitive card game with a semi-cooperative twist that shares a few mechanics of Biblios (one of my favorite games – see my review for Biblios here). Players are trying to overthrow the Roman Empire by obtaining influence in 6 different card types. Players draw cards one at a time and decide where to place them on the table. Then they can buy cards from stacks and may choose to play some cards to their own tableau. At the end of each round, Rome (the non-player) takes the remaining stack of cards worth the most gold. At the end of the game players may not even get to score any points unless they collectively dominate at least 4 of the 6 categories, instead of Rome. If they don’t, Rome is not overthrown, and the single player who holds the Primus Conspiratus card at the end of the game gets the outright victory. (Et tu, Brute?) If players do dominate 4 of the 6 categories, then victory points are tallied and the one with the most victory points wins. I love Biblios, I love tense decision-making, and I can handle a bit of back-stabbing, so I am excited to try PAX out. 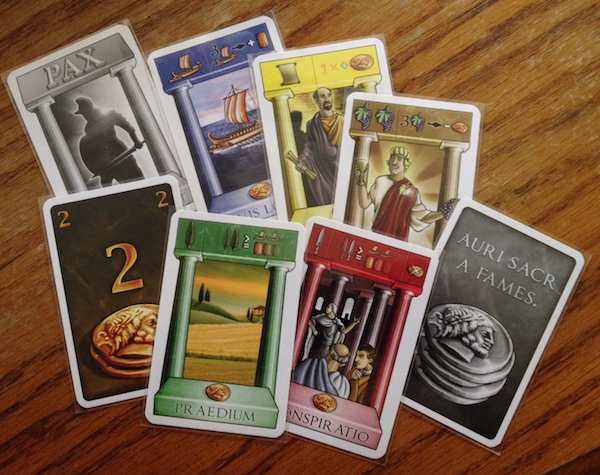 Clockwork Wars comes in a pretty big box, so how did I miss it? This game, which came out in 2015, has a steampunk theme (along with cool steampunk art) and is characterized as an area control game. The area control part looks very simple on the surface. Players simultaneously write down where they will be placing their colored discs on the board each turn and then all players place their discs. Any spaces that contain multiple players’ units have to fight, which basically means if I have 3 and you have 2, then we each remove two of our units and I have one remaining on that space. See, very simple. But Clockwork Wars has a lot more going on than this bland disc placement would indicate. Players also vie for technologies, espionage, and board terrain to acquire strategic bonuses, so they can improve the chances of maximizing their own area control while hamstringing opponents. For me, this one is a no-brainer. I love games with streamlined mechanics that put a bunch of strategic options in players’ hands. Clockwork Wars has gotten very little buzz, but looks like a hidden gem. I cannot wait to play it, though I may need a little help lifting the box. 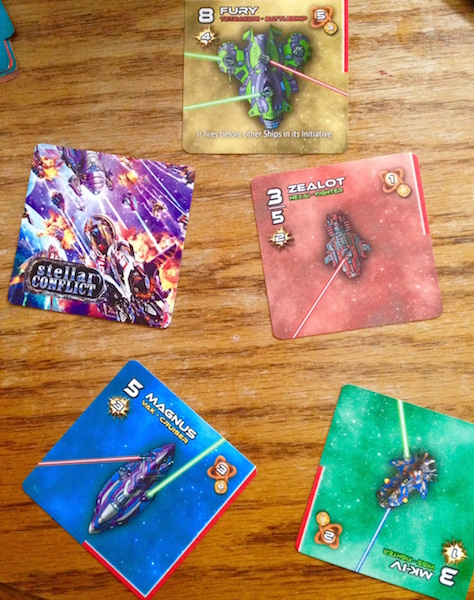 Stellar Conflict is one of those games that I had my eye on, but then forgot about. It came out in 2015 and I just got my hands on a copy. (yay me) Stellar Conflict has players engaging in short but tense space battles. The mechanics are extremely simple, but require quick decisions with little information to go on. Players take a race’s ships and create a deck based on their cost. Then, a timer is set with games ranging from 30 seconds to 2 minutes, and players then simultaneously place their ships on the table wherever they like. Once the timer expires players stop, and then they score the battle based on the ships’ initiatives and the directional lasers on the ships. The ship cards have a picture of a ship with one or more lasers coming out of it. Players use rubber bands to stretch out in a straight line from the ship’s lasers to see if it hits another ship card. If it does, then damage is assessed, with destroyed ships being removed from the board to earn victory points. There is a dexterity element to the placing of the ships, but since placement is simultaneous, there can be absurd results once scoring begins. Players may accidentally target their own ships and destroy them, with the victory points going to an opponent. The game’s theme comes from the Among The Stars/New Dawn universe. The art is colorful and excellent. There are 4 races to choose from, each with different ship abilities. Stellar Conflict looks like a great way to spend an hour, fighting battle after battle, with lots of laughs. There is an excellent video review by marcowargamer that you should check out, here:

Well, there you go. So, while you are waiting for the UPS guy to deliver your copy of Scythe, check these games out. Whatever you do, please keep nerding on.

For these and other excellent games, check out www.dicedropgames.com