Home » Stuff We Like » BUFFY Turns 20: A Celebration of Slaying in Sunnydale

BUFFY Turns 20: A Celebration of Slaying in Sunnydale 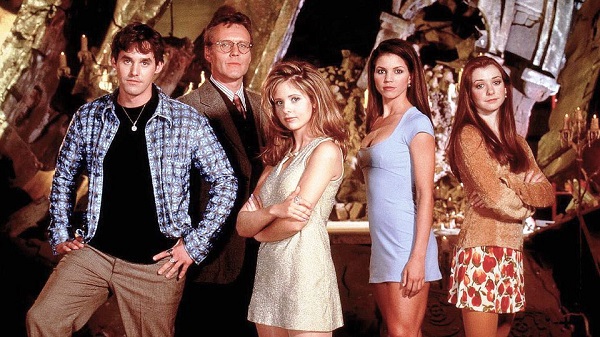 Remember the days when you’d watch your favorite high school teen slay vampires on The WB? Unfortunately, I don’t. I was also seven years old when Buffy The Vampire Slayer graced our screens in “Welcome to the Hellmouth.” I didn’t start watching until my freshman year in college. It was love at first bite (Get it? Because vampires.). Buffy was automatically elevated to icon status for me. She was a badass Slayer with killer fight moves. Buffy had more strength in her entire body than I could muster in my pinkie fingernail. That’s right, I’m not physically strong. However, what I lack in physical strength I make up for in mental prowess, so there’s that. But enough about me.

Buffy the Vampire Slayer revolves around a high school girl named Buffy Summers, who is tasked with the responsibility of keeping the forces of darkness in check. She is a Slayer, the Chosen One, gifted with supernatural strength to stake baddies that roam the night. Buffy is also armed with an arsenal of quick-witted friends and Giles, who is her Watcher (that word is pretty self-explanatory). They all reside in Sunnydale, California, where the portal to the Hellmouth also takes up residence. Yes, the entryway to Hell is located in a town that’s supposedly known to be sunny. If this isn’t enough to persuade you to watch, then perhaps check your priorities and maybe your funny bone, friends.

Creater Joss Whedon’s now cult classic was the catalyst for popularizing genre TV. Sci-fi and fantasy television are “cool” now, with major props going to our favorite Sunnydale Slayer. With biting dialogue and characters that pushed the envelope, Buffy and co. provided a foundation for many current genre shows. For example, The Magicians has dialogue that was heavily influenced by Whedon’s writing. 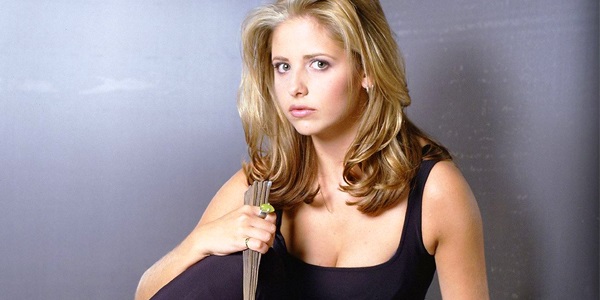 Buffy is also a wonderful role model for women from all walks of life. Whedon has said he hoped people would view her as a hero and not a heroine – to erase any kind of preexisting gender undertones. Yeah, she can kick ass like a man – the majority of the show’s fight sequences showcased Buffy knocking out the opposite gender. So take that, patriarchy! She started as a teenage girl saddled with incredible responsibilities (saving the world from darkness is a biggie). However, Buffy ended a mature woman, forged from the fire of the obstacles she faced. It was wonderfully refreshing to see such a versatile character arc in a female lead (for that time period). We saw her dark moments, her bouts of despair interspersed with her moments of triumph. Buffy showed us that courage doesn’t come from a lack of fear – that it’s okay to be scared.

Our favorite Slayer also inspired us to be brave, to be our best selves. She was a feminist trailblazer, especially for a show that premiered in the ’90s. Buffy didn’t just roll over whenever provoked, she stood up and fought for what was right. In “The Gift,” Buffy delivered a gut-wrenching monologue to her sister Dawn before she sacrificed herself. “The hardest thing in this world is to live in it. Be brave. Live,” is a quote that resonates with people to this day.

Then there’s the monologue she gave in “Chosen,” the series finale. Easily rivals Braveheart as far as inspiring speeches go. Just before she led her Slayer trainees into the Hellmouth to defeat The First, Buffy told them Willow would use the essence of the scythe to make potential slayers actual slayers. “Every girl who could have the power, will have the power. Can stand up, will stand up.” Excuse me while I slay 100 vampires and defeat every creature living in the Hellmouth after that uplifting speech.

Buffy the Vampire Slayer also boasted a wide array of truly standout episodes. Season 5’s “The Body,” anyone? I only revisit that episode sparingly. It has a tendency to make my eyes leak uncontrollably. But damn, if that isn’t one of the most beautifully crafted episodes on television depicting grief and tragedy, I don’t know what is. We saw Buffy’s reaction to her mother’s death and Anya’s emotional monologue about not understanding why Joyce is gone. The human condition has never been more accurately displayed. Also, the lack of music was a genius move. There was “Hush” from Season 4. Zero speech ability made for some fun scenes and also introduced the creepiest villains in Buffy history – The Gentlemen. 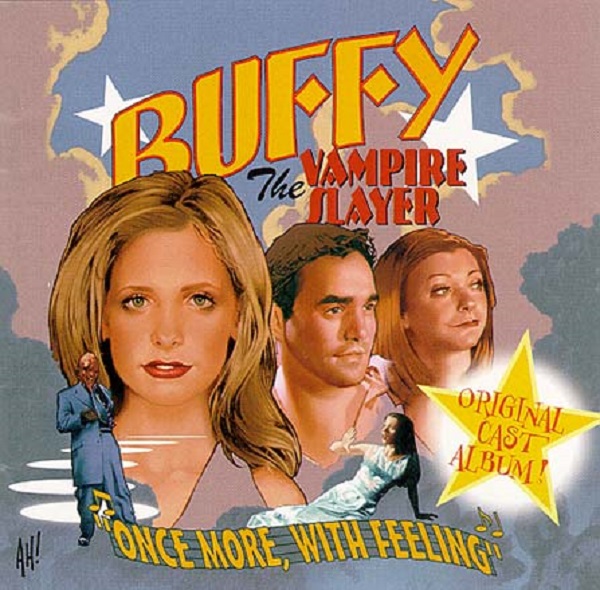 Excuse me as I belt a tearful ballad while staking vampires.

One of my all-time favorite Buffy episodes? “Once More, With Feeling” from Season 6, of course! I’m a sucker for all things musical and this one hit the sweet spots. Nothing like a demon compelling you to convey your innermost feelings through song. This episode initiated the popular trend of shows including a singular musical episode in their roster. To this day, series like Once Upon a Time are following suit. Supergirl and The Flash are even doing a musical crossover episode. That’s my girl Buffy, forever the trendsetter.

Also, you can’t forget Buffy’s kickass circle of friends. Willow, who made smart look sexy and powerful witches forces to be reckoned with. Xander, a male lead with no supernatural abilities who doesn’t “get the girl.” Forever in the Buffy Friend Zone, he was. However, he had a superpower all his own – his loyalty to his friends, as well as an overabundance of witticisms. Giles, the seemingly stuffy British Watcher who loved Buffy like a daughter. Anya, the sarcastic demon who adjusted to living domestically among humans. Cordelia, the popular girl who’s character evolved greatly even in her short time on the show. Spike, the formerly soulless vampire who went from plotting Buffy’s death to professing his love for her. Fine line between love and hate, folks.

Lastly there was Angel, the soulful (filled with a soul, not music) vampire love interest who left sunny Sunnydale and acquired his own show. But we’ll save that article for another day.

Relationships were paramount to the show’s success – from Willow and Buffy’s ride or die friendship to Anya and Xander’s tumultuous love story. Tara and Willow stole everyone’s hearts with their cuteness. They even broke records to boot. What other series in 2000 was showcasing a beautiful non-hetero couple on TV? Whedon’s characters helped propel more LGBT representation in television. Yes, it’s Tara and Willow all the way (WillOz shippers can see themselves out – that’s my name for them). Obviously, our leading protagonist’s own rocky love life peaked viewers’ interests. Her gradually budding relationship with Spike had a spectacular evolution. I’m also a Spuffy shipper, so…deal with it.

So in short: Buffy=good. Beer=bad. This show is timeless for all of the reasons listed above and more. Many of its themes and qualities are as relevant in 2017 as they were in 1997. Buffy the Vampire Slayer deserves all the attention it’s receiving right now and I hope someone new decides to start watching it. I will envy them for getting to view everything for the first time. Remember, if our Sunnydale girl has taught us anything, it’s that we’re all Slayers in our own right. Now, please excuse me while I commence my annual Netflix binge.

“I’m cookie dough…I’m not finished becoming whoever the hell it is I’m gonna turn out to be. I make it through this…and maybe one day, I turn around and realize I’m ready. I’m cookies. And then, you know, if I want someone to eat m – enjoy warm, delicious cookie me, then that’s fine. That’ll be then. When I’m done.” Buffy (Season 7 Episode 22 “Chosen”) 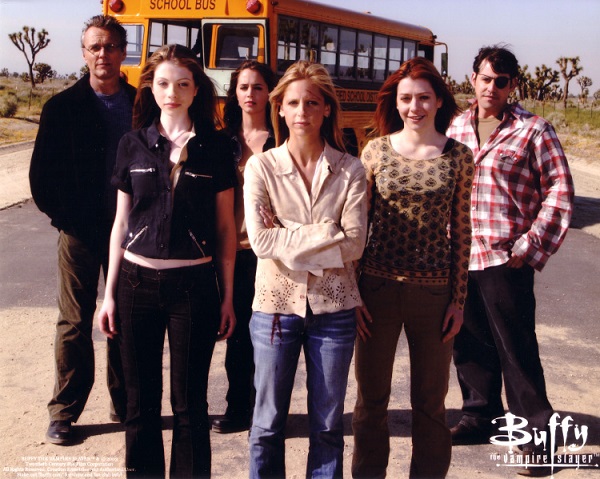 Reminder: they are watching their town get swallowed by the mouth of Hell.