2020 Rewind: Shows I Discovered in Quarantine

When it comes to quarantine, everyone has a different way of approaching it. Some have learned a new skill, others have perfected their craft. Then, there are people like me who decided that binge-watching TV is the only thing worthy of accomplishment. Here are my top five favorite finds of 2020!

Rachel Brosnahan as Midge and Alex Borstein as Susie in The Marvelous Mrs. Maisel

This show, hands down, was my favorite discovery in quarantine for two reasons: Midge (Rachel Brosnahan) and Susie (Alex Borstein). Not only does the 1950s setting help immensely during a pandemic of political/civil unrest, but it also has a hilarious cast of characters. In true Amy Sherman-Palladino fashion, the show is fast-paced and the dialogue is even faster — giving me beautiful Gilmore Girls flashbacks. Every scene feels like a choreographed dance and it’s incredibly satisfying to watch. I’m anxiously awaiting season four on Amazon Prime!

This FX show is actually the last show that I’ve discovered for the year. I’m disappointed I haven’t watched it sooner because it’s simultaneously just the right amount of comical, offensive, cringe-worthy and thought-provoking. While my heart sides with Sweet Dee (Kaitlin Olson) most, Mac (Rob McElhenney), Charlie (Charlie Day) and Frank (Danny DeVito) have their occasional moments. Then, there’s Dennis (Glenn Howerton). He might be a sociopath (among other things), but he’s the type of character that makes you oddly feel like you’ve known him for years. There are so many stand-out episodes in this series. I’m extremely excited to see how the gang takes on the pandemic and their own quarantine in the 15th season.

Rashida Jones and Kenya Barris in #blackaf on Netflix

I’ve been watching Black-ish from the very beginning. So, when I found out there’s a show that creator Kenya Barris is doing on Netflix that’s loosely based on his life, I knew it was going to be good. Between Kenya and Joya (Rashida Jones), their exaggerated characters make Black-ish’s Dre (Anthony Anderson) and Rainbow (Tracee Ellis Ross) look like the Huxtables. The constant need to keep up appearances, the unapologetic approach to highlighting why black culture is the way it is. Not to mention, the off-hand comments the kids make in reaction to their crazy parents make for one highly entertaining series.

Growing up, I would see bits and pieces of this show on UPN (formerly a predominantly urban network that was dissolved into the CW in 2006) when my parents would watch it. However, I was too young to follow the storylines. Flash forward to 20 years later and I was overjoyed to see that Netflix added Girlfriends to its lineup. This gave me an opportunity as an adult to properly be introduced to Maya (Golden Brooks), Lynn (Persia White), Toni (Jill Marie Jones) and Joan (Tracee Ellis Ross).

If I learned nothing else from this “grown folks” show, it’s that we should do the opposite of everything Joan did in order to have a successful relationship. I also learned from Toni that drama and friends are not a good mix for your mental health. I have several questions that remain after the show’s untimely cancellation, so Netflix if you’re reading this, where’s that reboot?

Jerry Ferrera as Turtle, Kevin Connolly as E, Kevin Dillon as Johnny and Adrian Grenier as Vince on HBO’s Entourage

I know I’m super late to the 2004 party, but E (Kevin Connolly), Turtle (Jerry Ferrara), Vince (Adrian Grenier), Ari (Jeremy Piven) and Johnny (Kevin Dillon) are my boys! They kept me laughing throughout the summer with their ridiculous ideas. Not to mention, their crazy encounters with so many people that were hot in Hollywood at the time. I enjoyed every single random cameo that HBO could afford and was invested in the success of Vincent and his whole crew. I also learned that Sloane (Emmanuelle Chriqui) exemplified what it means to be a fantastic girlfriend and quite frankly, E didn’t really deserve her.

My list of unwatched shows is still long and will definitely go into 2021, but I feel pretty satisfied with what I’ve watched this year. So let’s raise a glass to TV and all of those who made it possible for these amazing shows to exist. I wouldn’t have made it through quarantine without you — at least not with my sanity intact. Cheers.

This article was originally published on 12/11/20 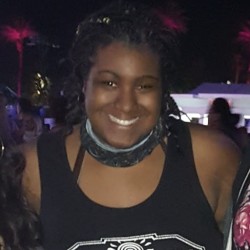 Say Hi!
Dara Gholston
Bakersfield raised, but Los Angeles living. Media has always been my primary passion - well that and brunch. I've worked for some of the top companies in the world. Want more info? Insta-stalk me: @thedsimone

Bakersfield raised, but Los Angeles living. Media has always been my primary passion - well that and brunch. I've worked for some of the top companies in the world. Want more info? Insta-stalk me: @thedsimone