100 Billion Brown Dwarf Stars May Be Hiding in Our Galaxy

Brown dwarf stars are hard for scientists to see.  They’re dim, because though they are bigger than known planets, they are not quite massive enough to ignite nuclear fusion.  Scientists went on a brown dwarf star hunt, and found that there may be a whole lot more of them than they previously thought.  Like, billions more.

It was previously thought that there were approximately six stars for every brown dwarf in the Milky Way.  But, as a result of a team of scientists using deep-space observations from a giant telescope in Chile, they found that they’re much more common than that. 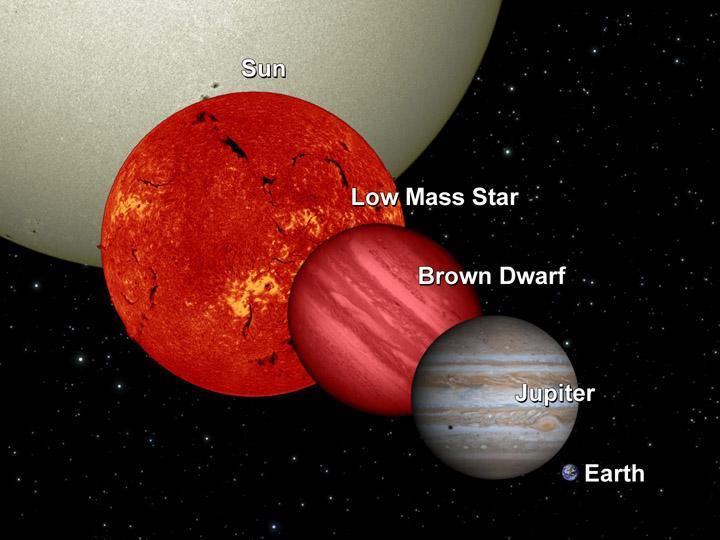 NASA’s Wide-field Infrared Survey Explorer will uncover many ‘failed’ stars, or brown dwarfs, in infrared light. This diagram shows a brown dwarf in relation to Earth, Jupiter, a low-mass star and the sun.

European Southern Observatory’s “Very Large Telescope called NACO” was used to focus on star clusters deeper in space than any scientists had looked for brown dwarfs before.  They focused on star cluster RCW 38 , 5,500 light-years away.  There, and in another cluster called NGC 1333, there were about half as many brown dwarfs as full fusion main-sequence stars  in the cluster.  That’s three times more than previously thought.  This according to space.com.

Apparently, brown dwarfs form in their own clusters around other stars, so they’re finding them in groups.  Team member Aleks Scholz said in a statement, “our work suggests there are a huge number of brown dwarfs out there.”  That’s an understatement.  Their estimates suggest that there are 25 billion to 100 billion brown dwarfs in the Milky Way Galaxy.  That’s just one kind of star in our galaxy, alone.  Did you want to feel small today?  You’re welcome.