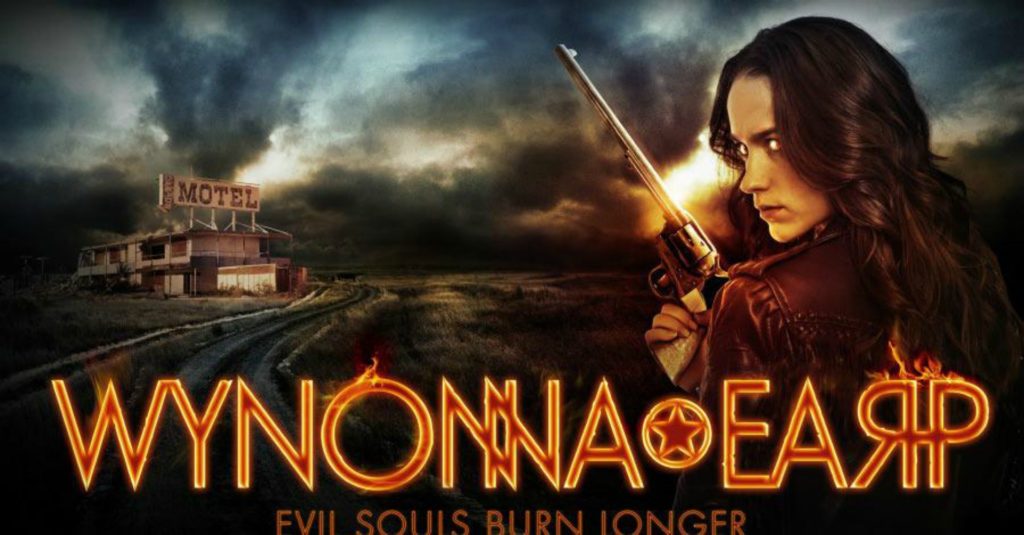 Wynonna Earp is a modern day western – with a demonic twist. If you didn’t catch it on Syfy last summer, now’s your chance! Season 2 premieres June 9th, but Season 1 came to Netflix on April 1st and there are only 13 episodes, which can totally be binged in a day!

The question then becomes why? Why should you drop your existing Netflix plans for Wynonna Earp? I’m glad you asked. . .

1. The Earp Legacy
Everybody knows about Wyatt Earp and the infamous OK Corral shootout: it lasted 30-seconds and Wyatt walked away without a single scratch. This is where most movies end the tale of the legendary lawman. But Beau Smith, who wrote the comic book upon which Wynonna Earp is based, wondered “what if” and added a mythical element to the story we all know; a curse is laid upon Wyatt and his descendants: the Earps will forever be haunted by the lives taken by his gun, Peacemaker.

Wynonna Earp is Wyatt’s great-great-granddaughter and heir to the Earp curse, which is activated on the heir’s 27th birthday. Our lucky leading lady returns home to Purgatory (exact location not provided) just in time to inherit this curse in the first episode.

2. Revenants, Demons, & Witches, Oh My!
The curse cast upon the Earp lineage isn’t a haunting by ghosts – it is a continued attack by the reincarnated souls of the 77 dead by Wyatt’s hand, known as Revenants. Wynonna must use Peacemaker to send them back to Hell before they kill her and her family to break free and roam the earth again.

But, because it can never be so simple, the Revenants are not the only things Wynonna must face. As it turns out, the world is full of all sorts of things that go bump in the night. Purgatory, and the surrounding area, is home to demons, witches, shape-shifters, vampires, and…a very big surprise.

There is also a government agency, The Black Badge Division, in town. Agent Xavier Dolls is sent to town and Wynonna must decide if she should work with him or avoid him – and if he is really someone she can trust.

4. Snarky Quips
Emily Andras (showrunner for Lost Girl) helms the show alongside Wynonna creator Beau Smith (Wildcat vs Batman, Wildcat vs Catwoman, Cobb). Together with a small team, they bring Smith’s characters to life with their witty dialogue and sharp comebacks. But the writing on the show is only half the equation; the cast has perfect delivery and timing. Melanie Scrofano (Wynonna) brings biting banter with Tim Rozon (Doc Holliday) and Shamier Anderson (Agent Dolls) and sells the sisterly bond with Dominique Provost-Chalkley (Waverly Earp).

5. Doc Holliday
I have to admit, John Henry “Doc” Holliday is my favorite part of the show. Tim Rozon has the swagger, the drawl, the mustache, the pistol finesse, and the hat tip down pat. He also has this Texas girl’s heart. *swoon*

6. Girl Power
While Doc is fantastic, the show centers around a strong feministic core. Wynonna is a badass that is always bucking the system and solving problems on her own. Waverly has plenty of brains and has done years of research on the Revenants and the Earp history. Then there is Officer Nicole Haught (Katherine Barell), who proves that a badge is more than just a fashion accessory. Agent Dolls sees all of this and is very accepting of who everyone is, even when he is disapproving of Wynonna’s headstrong attitude and the fact that it brings more trouble than if she would simply followed orders.

7. LGBT+ Representation
Wynonna isn’t afraid to push boundaries and standards. Officer Haught was actually created for the television show (she didn’t appear in the comics until the recent revival) and she is one half of a very adorable romance that caught the fandom by the heartstrings. One line in Episode 9, “you’re a lesbian, not a unicorn,” spawned an entire movement online where being called a unicorn is now synonymous with being LGBT+ and a thing to be celebrated. Unicorn themed fan art can be found alongside Peacemaker fan art, and helps identify Earpers to each other at cons.

Another romance exists in its unique way between two of the Revenants. As their story was revealed, my heart broke over their history. Maybe I’m just a sap, though?

8. Caring & Welcoming Fandom
The show has bonded fans from across the globe. Kevin Bachelder, of the Tales of the Black Badge podcast, speaks of the fandom:

“One of the wonderful things about the Earper family, and it’s truly become a family for so many of us, is how inclusive and positive they have all been. Some TV show fandoms develop clicks or subgroups quickly but that hasn’t been the case for the Earpers. It’s less about me and more about us. From the moment you meet another Earper, whether online or at a con, there is an instant connection and comfort level that is wonderful to see. We all came together last spring and summer and we had a direct impact on our show returning for season two so we all got to see the power of being positive in action and everyone brings that to all of their interactions with other fans.”

The fandom credits their #NoChill twitter campaign with the successful renewal for season two. There is currently a “Netflix & NO CHILL” rewatch live-tweet every Friday night at 10pm EST. The next episode scheduled is a double feature: Episodes 5 & 6. 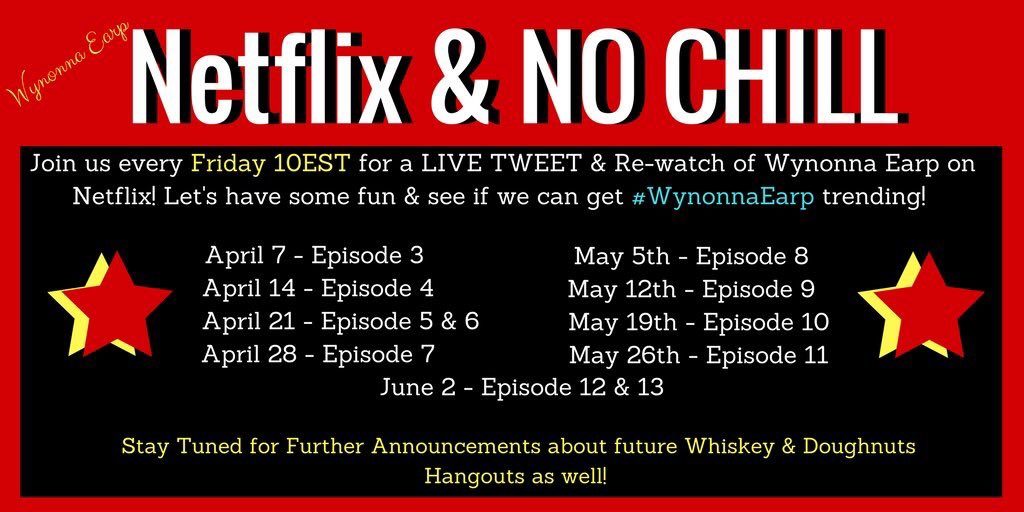 The fandom does more than just live-tweet and demand more Wynonna Earp. As Kevin mentioned, they are a force for positive. Fangirl Shirts has been watching Wynonna Earp since the first episode because they are fans of Emily Andras’ work and the premise of the show intrigued them. They have had seven unique shirt designs based on or inspired by the story and the characters with a new design in the works. Per Sally and Rebecca, “a core value of Fangirl Shirts is making the world a better place by supporting nonprofits with a portion of all our shirt sales” and as a result, over $3,000 has been raised from the sale of the Peace Maker design for Everytown for Gun Safety after the Orlando shooting in 2016. The new shirt design is teased to “celebrate the wonderful vibe of the Earper fandom.”

9. Involved Cast & Crew
Part of the fandom includes weekly “Whiskey & Donuts Hangouts,” hosted by Tales of the Black Badge podcast. It isn’t uncommon to find cast and crew joining in to chat. They also live-tweet the shows and interact with their fans online.

10. Supernatural + Buffy
If any of the above did nothing to sway you…
Think of Wynonna Earp as a love child between Supernatural and Buffy the Vampire Slayer. You get the strong female leads in a sibling-led fight for good – and a legendary Colt is included! What more could you ask for?